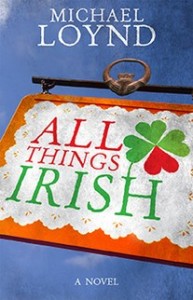 Michael Loynd’s novel All Things Irish is among the latest of books to be set in Door County and, like many writers who have been charmed by the peninsula, he publishes the cover-your-butt disclaimer: “This is a work of fiction,” maintaining that “any resemblance to actual events of locales or persons, living or dead, is entirely coincidental.”

Part of the fun of the novel is reading it as a roman a clef, identifying those real characters and places that served as models (who might have been the original for local author Booker Wade and what village might be Whitefish Creek?) and noting anachronisms (“Baldy” Bridenhagen who passed away decades ago is the sheriff, yet a local fisherman uses a GPS device).

The story begins as 30-year-old Meg McKenna moves to Door County to help her mother run her floundering All Things Irish shop in Whitefish Creek. Tension mounts as locals resent the intrusion of something not Scandinavian in the community and a dark secret emerges as Meg attempts to rekindle a summer romance from her much earlier time in Door County as a teenager. Her sister’s health and marital issues exacerbate Meg’s worries, as does a truck accidentally breaking through the ice of Death’s Door.

Loynd adds Irish comic relief through quotations that begin each chapter, quirky traditions and corny jokes. His research into all things Irish, he writes, included information shared with him by the owners of Irish shops both in St. Louis and Fish Creek.

While the story line is at times compelling and emotionally engaging, the text occasionally needs the expertise of a professional editor, a hazard of self-publishing. The prose sometimes stumbles, the plotline has a few snags, and the humor may seem forced as the author appears to be targeting a beach-reading chick lit demographic.

Readers who can accept a gem in the rough of a novel will find All Things Irish a quick and entertaining read and they will appreciate the complicated mythology of Door County that emerges, one often perpetuated by tourists and locals alike. This may not be the next Great American Novel, but it is a funhouse mirror that offers an amusing reflection of life on the peninsula.

“A family of Irish birth will argue and fight,

But let a shout come from without

And see them all unite.” – Irish Saying