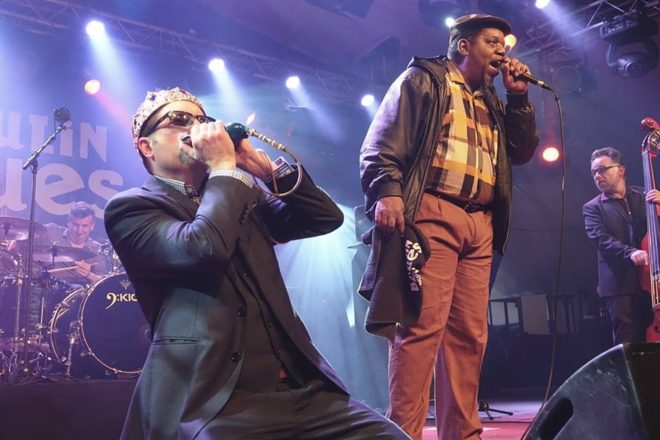 For Door County folks, a trip to Green Bay usually marks a special, once-in-a-while occasion:  a Packers game, maybe a doctor’s appointment, or a limited release movie not offered at Sturgeon Bay Cinemas. Next weekend, another such event will come up when Alligator Records hosts its Blues Festival at Meyer Theatre in Green Bay on March 9 and 10.

The concerts will feature Elvin Bishop’s Big Fun Trio at 8 pm on Friday, with The Cash Box Kings as their opener. On Saturday, Shemekia Copeland will perform at 8 pm with Door County favorite Corky Siegel’s Trio as her opener. 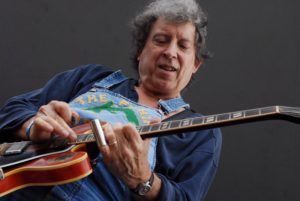 Alligator Records recently celebrated its 45th year of existence with an Anniversary Collection, compiling all of the music the record label has produced over time. In 1971, Bruce Iglauer, then a shipping clerk for a blues and jazz label in Chicago, decided to record an album with his favorite band, Hound Dog Taylor & The HouseRockers. Iglauer printed his own copies of the album and travelled around, convincing college radio stations to play the record and local shops to sell it. Less than a year later, Iglauer quit his job to run his record label, Alligator Records, full time.

In these early days, Iglauer didn’t have the funds of other larger labels, so each record release was expected to fund the next one. Alligator Records would only release one record a year, but as each successive record triumphed, the record label began to build notoriety across the blues scene. Today, Iglauer still runs Alligator Records, and it is known across the world as one of the preeminent independent blues record labels. The four artists that will perform at the Blues Festival were handpicked by Iglauer himself and represent the past, present and future of Alligator Records (as well as of blues music itself).

The Cash Box Kings will kick things off on Friday night, with a sound that is firmly in the tradition of the golden era of Chicago blues (a period from the early 1940s to the late 1960s). Led by their harmonica player, Joe Nosek (from Madison), and their vocalist, Oscar Wilson, Igluer describes The Cash Box Kings as a “rough, tough, and raw band.” Wilson, their singer, grew up in Southside Chicago where his family would host Friday night fish fries and various blues artists in the area would show up throughout the night. Wilson has blues running through his veins and has been compared to Muddy Waters as a spiritual influence. 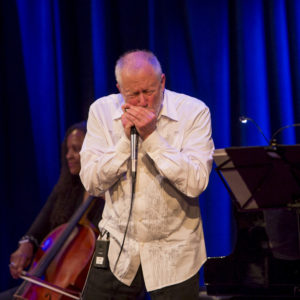 After the Cash Box Kings open things up with a bang, Elvin Bishop will take the stage, with a contrasting, stripped down trio. Though known for a big band, Bishop will have neither drums nor a bass featured in his performance, electing instead for only a guitar and a percussionist who will play with his hands. Bishop’s music is loose, and, like the best blues music, it comes out different with each and every performance. Of Bishop’s performances, Iglauer said, “He just wants people to smile and have fun.”

Saturday promises to be just as entertaining, beginning with Corky Siegel, who performed only a month ago at a concert to benefit The Healing Project at Door County Medical Center. Corky lives only a block from Bruce Iglauer, and the two have been friends for a long time. Iglauer spoke glowingly of Siegel as a real visionary, though he admitted he knows little of what Corky’s Trio will sound like.

Siegel has been performing since the 1960s and is a constantly evolving musician. He released a number of critically acclaimed albums and has worked with acts such as the Allman Brothers and Janis Joplin. More recently, he released Corky Siegel’s Chamber Blues, which fuses classical music with the blues, a combination rarely, if ever, explored before Siegel. Performing with Corky will be percussionist Kalyan Pathak and teenage blues guitarist Will Tilson. Iglauer said of Corky Siegel’s approach, “Corky just loves to put people together and see what happens.”

Shemekia Copeland will finish off the two-day festival with her Americana infused, gospel influenced blues music. Iglauer spoke reverentially about Copeland, deeming her the “number one blues artist of her generation,” and suggesting most people in the contemporary blues world would agree with the lofty praise.

Daughter of Johnny Clyde Copeland, a Texas blues singer, Shemekia grew up in Harlem and made her first public performance at age eight at the famous Cotton Club. She signed with Alligator Records and made her first album with them at the age of 18, and has been making incredible music, with her powerful voice and intense lyrics, ever since. She will perform with a big, brash band, and her one-year-old child may even make a cameo appearance at the concert (“she’s a very proud mother,” Iglauer said of Copeland).

The concert will be a mix of everything blues has to offer – some big bands, some acoustic, some of the classic sounds, and also some more modern influenced music. Blues is constantly adapting to fit the contemporary culture, and Iglauer knows the genre is in good hands with these performers.

“Blues is music that is charismatic. Lyrics that are based in real life. We call it tension and release. It makes you feel better by feeling worse first. It squeezes the pain out of you.”

Tickets can be purchased at meyertheatre.org. Each night costs $40, while the two-day event costs $65.