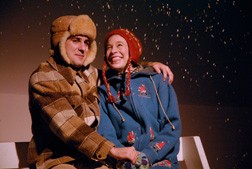 Stage Door Theatre’s Almost, Maine will be performed through Oct. 14 with special matinee performances on Oct. 7 at 2 pm and Oct. 14 at 3 pm. Almost, Maine is a romantic comedy written by John Cariani and directed by James Valcq.

Almost, Maine will be performed nightly (except Mondays) at 7:30. Tickets are $20 for general admission, $15 for seniors and active military, and $10 for students.