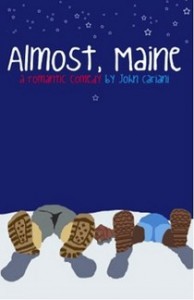 Stage Door Theatre’s Almost, Maine opened on Sept. 20 and will be performed through Oct. 14. Almost, Maine is a romantic comedy written by John Cariani and directed by James Valcq.

The play is set on a cold, clear, moonless night in the middle of winter, in the remote, mythical town of Almost, Maine. As the northern lights hover in the star-filled sky, residents of Almost find themselves falling in and out of love in unexpected and hilarious ways.