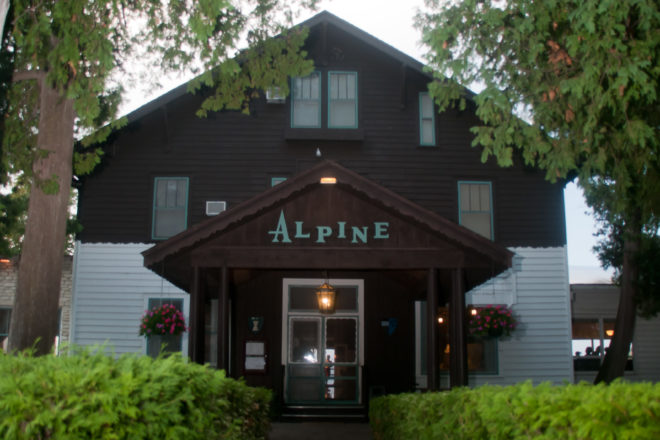 After 100 years under the ownership of the Bertschinger Family, the Alpine Resort is changing hands.

The name of the new owner was announced only as Alpine Resort Acquisition Company, LLC, and the purchase price was not revealed. Broker Jacinda Duffin of True North Real Estate, who represented the buyer, said fans of the resort will be happy to hear the plans for the property.

“The buyer loves this property and the history of the Alpine,” Duffin said. The sale marks the beginning of a restoration effort by the new owners, who are already grooming the golf course, renovating the clubhouse, and making plans to refurbish the historic lodge.

“Plans are in place to restore the main lodge and clubhouse, improve the golf course, and rejuvenate the waterfront,” according to an announcement from the purchaser. “Future expansion plans will offer a variety of dining and lodging accommodations, as well as other recreational activities along the waterfront.”

In a separate statement a spokesperson for the new owners said they have “fond memories of visiting the Alpine Resort ourselves and look forward to welcoming guests for weddings, family vacations, conferences, and getaways as has been done since the resort opened in 1922. We thank the Bertschinger family for their years of  caring for this unique property, and we are thrilled to be the new stewards of such a beautiful piece of  Door County. We plan to be here to create the next 100 years of memories.”

While the main lodge and cottages remain closed for renovations, the Alpine Golf Course and clubhouse will open to the public for the 2021 season. The sale consists of 165 acres of open green space, bluffs, nearly half a mile of Green Bay shorefront, the Alpine Golf Course, cottages and the iconic lodge.  A portion of the golf course was sold last year.

For Bill Bertschinger, whose father Paul built the resort with his brother John, the sale is bittersweet (maybe without the sweet). “You can probably guess what I think after working there for 89 years” Bertschinger said. He said it was tough to sell the property he has been a part of his entire life, and if he had his way he’d still be working it every day. But when there are 21 family members involved, they don’t often think alike.

“I don’t dwell on it,” he said. “But of course you think about it. You can’t just walk away. It’s not a blackboard that you can just erase. The mind won’t let you do that.”

Bertschinger has always described himself as a workaholic, quick to point out that he’s “not complaining, I’m explaining.” He likes to work, even at 92 years old. Asked if he’ll finally retire, he scoffed. “We’ve still got rental properties. I’m in the office right now.”

Signs of revival at the resort popped up gradually around the Alpine Red and White nine-hole tracks during the past three weeks. Mowing resumed in April at the course, in similar fashion as in 2020, but with fairways perhaps more defined than last year. Owner Bill Bertschinger had said he was working to preserve the courses in 2020, when he kept greenskeepers and grounds crews on the job despite the course being closed to golfers due to COVID concerns.

Late last month, tee markers became visible to passers-by on County G, and then a roll-off dumpster showed up outside the clubhouse. All of those features — as well as the reappearance of ball washers — spurred excitement among golfers that the course would reopen sometime this spring. But those visuals did not indicate who might reopen the course.

When The Alpine opened its doors in 1922 it was the first tourism-centered business in Egg Harbor, catering to vacationers that were a far cry from those of today. Only a few years later Bill was born. By age 12 Bill was hard at work for his dad.

The resort was put up for sale in 2018 for $15 million. At the time, the family said in a statement that “ownership today includes siblings, cousins, uncles and aunts. Because of the complexity of the ownership structure spread out over family members, along with changing interests, the family has decided to list the property for sale.”

Before the Alpine opened John and Paul Bertschinger had planted a family foothold in the town with farms, a lumberyard, and the Kewaunee House (now Shipwrecked) in the first years of the 20th century.

In 1912 John sold the stretch of waterfront property where the Alpine now stands to Ferdinand Hotz, a decision that didn’t sit well with Paul.

“You sold the best piece of property you’ll ever own!” Paul told him, and the two set to work to buy it back, which they did in 1914 – for twice what John had sold it for.