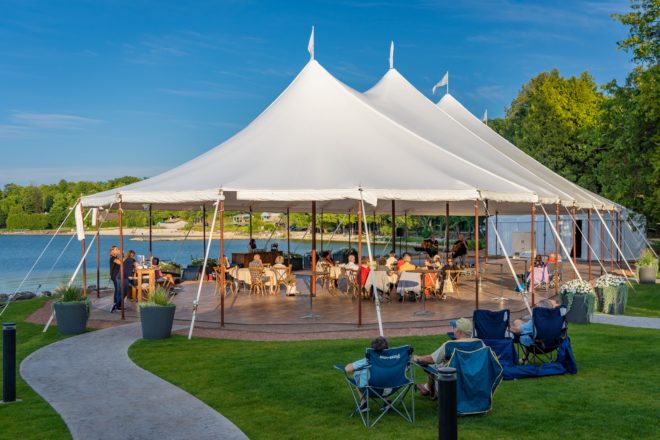 Guests can sit in the tent or on the lawn or dock outside it. The seats inside fill up quickly, so it’s a good idea to take a lawn chair as a backup. Photo by Rachel Lukas.

You’ll hear it before you see it

If you’re driving through Egg Harbor with your windows down on Wednesday nights this summer, you may get serenaded by the Alpine Resort’s Concerts in the Tent series. But close up, you’ll get more than just a free performance.

The white tent towers over the bayside, set on a wood-like floor next to the resort’s Burton’s on the Bay restaurant. Four massive wooden posts hold up the canopy, with strings of lights running between the posts and poles that make up the frame.

On this particular evening, the tent was set with five large, sit-down tables and double that number of high-top tables scattered under half of the tent. The other side featured the evening’s talent, musician Bob Bero, who was set up with his guitar, tip jar and two large speakers. The whole place felt at ease, as though everyone had collectively agreed to stave off the midweek blues with good company, good vibes and good music.

The audience of about 40 people, who mingled inside and outside the tent, tuned in to Bero’s performance. Anything seemed to go as far as the attire was concerned, from casual T-shirts to dressy resort wear. Carry-in food and beverages were not allowed, but lawn chairs were, and even those without them found steps or the edge of the dock to sit on. Others milled around, leaning against the standing tables or talking with friends, drinks in hand.

Speaking of drinks, the on-site bar menu offers wine, domestic beers and a few other sipping options, along with quick eats from Burton’s next door.

But the tent’s greatest feature sits in the direction opposite the music. From the Alpine, visitors can see the same sunset that makes Egg Harbor Beach so brilliant. The concert runs the duration of the evening, which allows guests to arrive in nearly full sunlight, stay until darkness and, weather permitting, soak in a front-row view of the sky’s gorgeous reds, yellows and pinks in between.

As some people walked along the dock, with the boats barely bobbing in the water, a few others turned their chairs toward the bay, away from the tent. But, their toes were still tapping, and their shoulders were still swaying to the live soundtrack accompanying the sunset views.

The Alpine Resort’s Concerts in the Tent series takes place every Wednesday, 6-9 pm, with varying performers providing the tunes. Find out more at alpineresort.com/events or on its Facebook page.