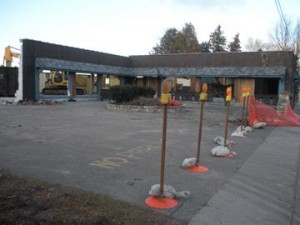 • Demolition of the former Al Johnson’s Butik in downtown Sister Bay began in late November. The building is being torn down to make way for the expansion of the village’s Waterfront Park. The village bought the property in June for $5 million.

“I am humbled by Governor Doyle’s trust, and I promise to serve the people of Calumet County with every ounce of energy I have,” Dietz said. “I went to law school, and I chose to be a prosecutor, because I was once the victim of sexual assault. When I saw what the women of Calumet County were facing from the person sworn to protect them – when I saw a District Attorney victimizing women – I knew I had to apply for this position to restore faith in this office and find justice for other survivors.”

Dietz has been the Assistant DA in Manitowoc County since 2005.

• First Assembly District Representative Garey Bies (R-Sister Bay) was named chairman of the Assembly Committee on Public Health and Safety Dec. 7. Bies, who won re-election to his sixth term in November, also sits on the Criminal Justice and Corrections Committee, Tourism Committee, and the Veterans and Military Affairs Committee.

“The Public Health and Safety Committee is a new appointment for me and I am looking forward to this new challenge,” Bies said.

• The Sunshine House Inc. burned the mortgage at its Holiday Open House Dec. 2.

In 2006 a $1.8 million capital campaign was developed to pay for the construction of a 17,000 square foot addition and renovation to the organization’s building in the Sturgeon Bay Industrial Park, which added 31,000 square feet to the building. The mortgage for that effort will be satisfied this month.

The Sunshine House serves nearly 100 people with a variety of physical and developmental disabilities.

• Wisconsin’s ban on texting while driving went into effect Dec. 1. The new law bans operating any motor vehicle while composing or sending an electronic text message or an electronic mail message. Fines range from $20 to $400 and could cost offenders four points on their license. Twenty-nine states have similar bans, 11 of which went into effect this year.