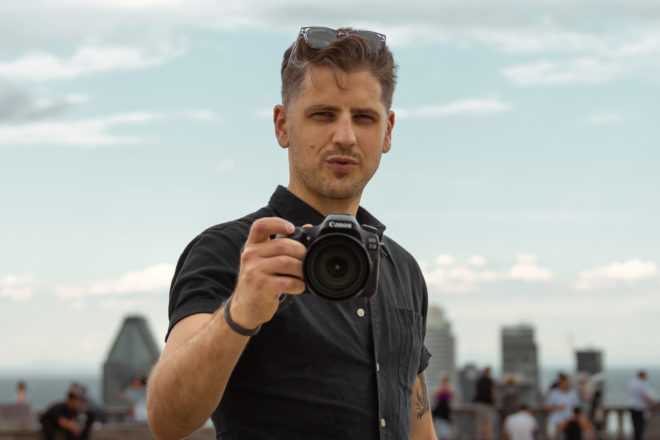 Find the Right Amount of Creativity

Wherever he goes and whatever he does, it’s important to 1998 Gibraltar graduate Anders Erickson to be able to incorporate exercising his creativity, even if it means doing so while slinging drinks at or managing Ward Eight, a Chicago cocktail bar.

Erickson grew up in Sister Bay and spent college summers acting and interning at Northern Sky Theater (then American Folklore Theatre, or AFT). In high school, he played numerous sports, got involved in student government as class president and participated in theater, band and choir. His high school friends remain some of his closest, he said, partly because he was so involved with everything that was going on.

“I was involved in just about everything I could be,” he said. “Anything I could sign up for, I would. I even signed up for things I shouldn’t have.”

His purpose for doing so came from a mindset of wanting to get into a great college, he said. When he began school at St. Norbert College to study art, he realized that a lot of what he’d done up until that point may not have been as necessary as he’d thought.

“I became less focused on what it was I had to do,” he said. “College was a little more fun for me, I guess.”

The process of choosing where to go to college was stressful, Erickson said. He went on a road trip to visit schools in Wisconsin and Minnesota, but he said St. Norbert felt the most natural to him.

“Growing up in Door County, your world is so small,” he said. “Once you get out of that, it’s amazing how it keeps growing. You can stress a little bit less about the small things.”

His summers at AFT inspired him to get just as involved in the arts in college as well, mostly theater and art shows. He also worked in the dark room at a photography lab. Erickson soon became interested in printmaking, intrigued by the fact that it was a dying art. It was his outlet.

“I found it easy to lose time, to lose myself in that,” he said.

Following college, Erickson headed to Chicago to pursue acting, mostly improvisation and film work, and continued that until 2010 when he realized he needed a change.

“By the time I was reaching the end of my 20s, I was starting to feel a disconnect with everybody else that was pursuing that career, at least in Chicago,” Erickson said. “You had to go in and sell yourself, not just to the person that was going to be casting you, but to other actors.”

But that’s not who Erickson was deep down or who he wanted to be anymore, and by a stroke of luck, he was offered a management position. He hated it at first but learned a lot about how to operate and run a business and how to manage people.

A group of people he met at that job decided they should move on to a new space together – what is now the Ward Eight cocktail bar. Erickson has been managing there for the past seven years.

The space is small, with only a few staff members at the front of house, and one in back. It’s very much a family-type operation, he said, which is something most Door County natives are familiar with.

Erickson started working in the service industry at the Sister Bay Cafe – now Wild Tomato – at age 14, and he’s worked for a number of other food establishments, but never anything in the corporate realm.

“I’ve always stuck with small, family businesses because of it,” Erickson said. “That’s just kind of where my comfort lies.”

After returning to the service industry, Erickson no longer had the creative outlet he used to, though he sometimes thinks of making drinks as a creative outlet. It’s still very much in line with connecting with customers, though, which is important to him as a bartender.

To make up for the creative loss, he started taking guitar lessons and printmaking classes, and most recently, photography classes. The challenge is that with a management position in the service industry, you’re working 60 hours a week, and there isn’t a lot of time for creative exploration, he said.

“It’s important for me to always have a foot in that door, where you can be creating something still,” Erickson said.

Taking photography classes and finding that balance with work has enabled him to stay accountable and keep pushing his art forward. And, he said, it helps that his girlfriend is pursuing the same lifestyle.

“We’re both trying to break through and see what’s next for us,” Erickson said.

They’re still exploring their goals, but they’re dreaming about starting a photography business for work such as headshots or product shooting. They’d also love to incorporate their love of travel if possible.

“Time moves pretty fast, and the ability to handle change is extremely important, and when to acknowledge when to change,” Erickson said. “You either have to be open and available to change, or simply see that you are either not happy or things aren’t going the way you want.”