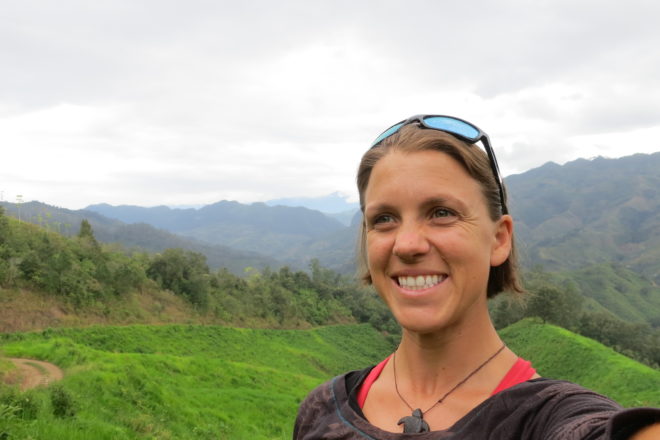 To suggest an alumnus or alumna to profile, email [email protected] To learn more about Alumni Door County, visit alumnidoorcounty.org.

“My life actually had zero direction,” said 2004 Gibraltar graduate Erin Leline. “I still don’t know what I want to do with my life. I just keep walking through doors that are open.”

And Leline has walked through many doors, especially those that lead her to other countries. She’s worked with children who have Down syndrome in Ecuador, underserved youth in the Dominican Republic, sea-turtle conservation in Costa Rica and river dolphins in India. She’s lived on her sailboat in Puerto Rico and taken a 14-month motorcycle trip over the span of two years and 13 countries through South America.

When an opportunity arose, she grabbed it.

Leline’s parents, who have a horse farm in Baileys Harbor, were teachers and turned every family experience into a learning opportunity. This instilled in her the desire to learn, and she hasn’t wasted any chance to do so.

Early on, Leline’s parents encouraged her to travel. Inspired by her sister’s Rotary International youth-exchange trip to Argentina, she made it her mission to study abroad before going to college.

She set aside sports – volleyball, basketball and track – to graduate early. That’s when she went to Ecuador for a few months, working for a program called Eye-to-Eye. She returned to the U.S. in spring 2004 to go through the graduation ceremony with her class.

“I realized how much I had changed, and I didn’t know how to handle it,” Leline said. “The [Eye-to-Eye]company prepared us for culture shock going to a new country, but they didn’t really prep us for the culture shock going back to your own culture.”

Once she got to the University of Minnesota-Twin Cities, Leline went straight to the study-abroad office. Then she went to the Dominican Republic with a handful of other students from the United States, and they became a close-knit group.

“We heard a lot of people’s stories – ones saying that they were having an amazing time, and others that were experiencing racism, which we don’t hear a lot about in Door County growing up and how that affects people and their experience,” Leline said. “That was my first big eye-opener to being directly connected to somebody that was experiencing severe racism.”

There were also inner-city kids there who had never seen the stars or the Milky Way before, Leline said. It was cool for her to see them in awe at something Door County residents sometimes take for granted.

When Leline went to the Dominican Republic for a second time and worked at a boarding school, she took leather and horsehair to make bracelets with the young girls there as a way to open a conversation and teach them about skin color and racism, she said.

After the program with the girls ended, Leline had time left and ended up getting involved with sea-turtle conservation. She was hooked and traveled to the Pacific Coast to live on a beach patrolling sea-turtle mothers, collecting eggs, monitoring a hatchery and taking statistics.

Her team slept in driftwood tents, pulled their own water from a well, had potable water delivered to them once a week, hiked an hour to get vegetables from a local restaurant and had one cell phone for emergencies that was charged with a solar panel.

Leline earned a global-studies degree in 2008 from the University of Minnesota-Twin Cities with an emphasis in environmental and sustainable development in Latin America and a minor in Spanish.

Her passion for sea turtles led her to pursue a summer program at Duke University that had a marine lab and a course on the biology and conservation of sea turtles. A group of people she met there all decided to go to India to attend an international sea-turtle conference.

Between semesters and her travels, Leline came home to Door County to work at JJ’s, the Old Post Office, Digger’s (now Wild Tomato) and a parasailing company in Ephraim, and she earned her captain’s license to sail a catamaran out of Ephraim. She also spent a few seasons working in Lake Tahoe, California.

“Door County has always been my home base,” Leline said. “It’s always been where I regroup, work really hard for the summer months and then go travel for the winter.”

Her two goals in life are to make people smile and to inspire curiosity, and she wants to mesh those together. She’s back in Door County this winter, trying to figure out how to next attack those goals.

“Now I’m here for the winter to sit and stop moving and think about what all of these experiences in my life have to offer other people and how to inspire people,” Leline said.