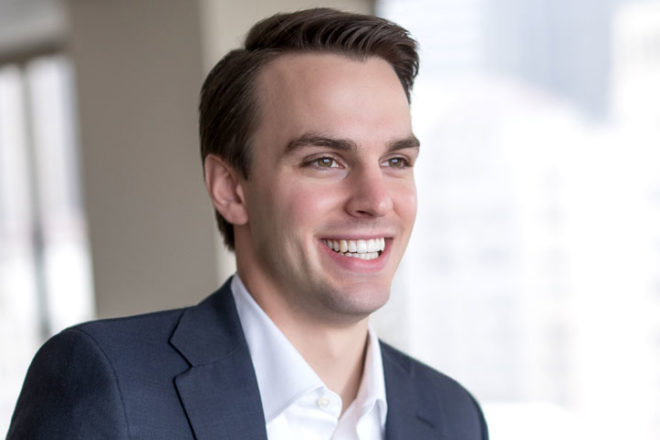 On taking chances that feel right and pay off

Deciding to get an education at the University of Wisconsin-Madison was a bit of a gamble for 2009 Sturgeon Bay alumnus John Parent.

He had explored a wide range of schools from east to west, but he chose UW-Madison because of the availability of the Chick Evans Caddie Scholarship for full tuition and housing. The hitch was that he couldn’t apply for it until his freshman year of college had already begun.

Parent had caddied at Horseshoe Bay Golf Club during high school, but it didn’t have an official program until the summer leading into his junior year. He needed more experience to apply for the scholarship, and he had to caddy the summer before going to college, too, whereas other students had already applied at that point.

“I went to Madison for a handful of reasons,” Parent said, “but a big one was that I wanted to see if I was going to get the scholarship or not. And I thought it was a good school.”

Parent and his three older siblings were heavily involved in sports growing up. He spent a lot of time going to their games, plus the games and extracurriculars of his cousins. His mother was one of nine, so he had relatives all over the peninsula.

Because of the size of his family and its involvement in sports, Parent was deep into the dynamics of small-town life. Though he wanted to go to the UW, he was apprehensive about sharing a campus with 40,000 other students.

“There were many people that I solicited advice from who said, ‘Go to a smaller school. You’re going to want to be someone who’s well known on campus,’” Parent said. “Although I think that advice was well intentioned, I think it was actually the incorrect advice for me.”

He realized that stepping out of his comfort zone and widening his horizons were key to his progression in life. And his leap of faith worked out: He was awarded the scholarship during his freshman year and was able to take advantage of it during his sophomore through senior years.

By the end, Parent had earned a business degree. He comes from a family of entrepreneurs and was always interested in business. He said he was always the kid who was starting little businesses when he was growing up – selling raspberries from the patch behind his house, gathering aluminum cans with friends or trying to start a breakfast-delivery company.

Parent started a company during high school called Sweet Tooth Vending that he ran throughout college. It was an idea inspired by his mentor and football coach, Randy Wright, who was a former quarterback for the Wisconsin Badgers and Green Bay Packers.

Wright had also started a vending company in Madison and had suggested that Parent consider the idea when he was thinking about potential endeavors.

“It gave me hands-on experience of running a real business,” Parent said.

He ended up selling the business to Bryce Hartl, another Sturgeon Bay graduate, who ran it for another five or six years, Parent said.

Parent’s interest in business was in competition with his interest in sports broadcasting. He went to college with his mind open to both possibilities and took courses in both fields. When it came time to make a decision, he realized that the UW had restrictions about some double majors, and journalism and finance fell into that category.

Ultimately, Parent found finance to be interesting, and it came easily to him, so he chose to continue with it. After graduating and starting his career at Baird in Milwaukee, he moved to San Francisco, where he works as a private-equity professional at Industrial Growth Partners.

Going from Sturgeon Bay to Madison was a big change, but moving across the country was even more significant. Parent said it took him longer than he was expecting to get used to the city, but he’s since made friends with people from California, New York and other countries, plus friends from the Midwest who share his Midwestern values – and of course share an interest in the Packers and Brewers.

Though there’s often an understandable instinct to stay close to home, Parent said that moving away from your hometown or home state allows you to develop a greater sense of independence.

It’s a win-win, Parent said, as long as you look at it from the “glass is half full” perspective.

He advises upcoming graduates not to underestimate themselves or sell themselves short. Whatever the goal is – to get a job at a company, get into college or play college sports – don’t let coming from a small town create apprehension.

The reality is that growing up in Door County and learning skills from a variety of sports, other extracurriculars and summer jobs are experiences that people from other places don’t necessarily have.

“The bigger risk is not taking one,” Parent said. “People love hiring Midwesterners. We’re hard-working. We’re humble and modest. Know that in the back of your mind, you can take on any challenge, and even if you fail or it appears that you’re failing, you’re winning in the long run.”