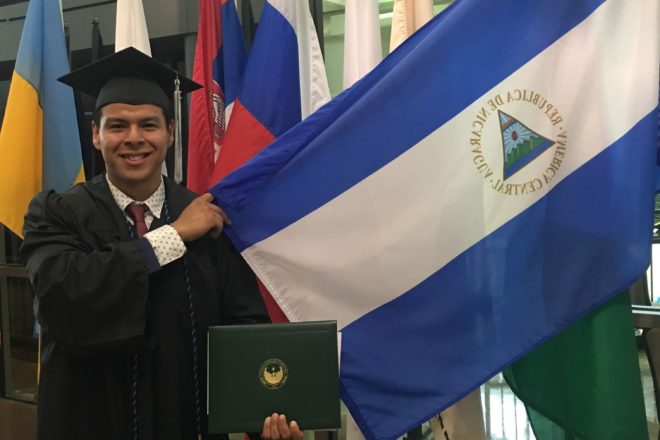 Gomez poses with the Nicaraguan flag during his college graduation ceremony in 2019. Submitted.

A grand pursuit of the American Dream brought Johnny Gomez 5,500 miles from Nicaragua to Sevastopol School, where he graduated in 2015. His journey to graduation was far from ordinary, and his story – which is still being written – is already enormously inspiring.

Gomez was born to Nicaraguan parents, Octavio and Vera, and grew up in Managua, Nicaragua. Gomez credits his parents for their dedication to their family and their hard work to provide a quality life for him and his brother and sister.

“My surroundings were very, very poor,” Gomez said. “It was pretty much struggling with what you would be eating in the next week. There were some unhealthy neighborhoods and troublemaking, but I saw the examples of my parents, and they were always working very, very hard.”

Throughout his formative years, Gomez enjoyed playing the traditional childhood games of soccer and tag with his friends.

“We didn’t have soccer fields, so we’d play on the streets on concrete,” he said. “We’d be setting rocks on the ground for goals. We would always congregate and literally play every night.”

But his parents also instilled in him early the belief that education is the key to success. They enrolled him in private schools, insisting that he make education his priority, but Gomez said he didn’t always cooperate.

“I wasn’t always the greatest student,” Gomez acknowledged. “I failed four classes and had to repeat seventh grade. I just didn’t want to do school.”

Instead, Gomez felt a strong entrepreneurial spirit pulling at him.

At eight years old, he began selling the mangoes from a nearby tree around the neighborhood. Soon after, he began seeing opportunities in whatever he could get his hands on.

“Look how much money I made today selling mangoes!” he would tell his dad. His father pushed him to do more, and soon he was selling chocolates to his elementary school classmates.

Business became a way of life for Gomez. He sold fireworks, games, cards and balloons.

Although his father taught him the basics of business, his mother emphasized respecting and acknowledging others, no matter what their employment or perceived social status was.

“My mom emphasized to recognize everyone, everywhere I went,” he said. “She said to make sure to say ‘hi’ or ‘hello’ to everyone I worked with and create relationships with the security people, bus drivers … basically everyone.”

After his mother lost her job during the Great Recession, Gomez heard his parents discussing financial difficulties. It took weeks, but he was eventually able to persuade them to allow him to move to America to earn money.

Gomez’s aunt and grandmother had lived in Door County since the early 2000s, and he had spent a couple of weeks in January 2009 with them. He knew about restaurant-industry opportunities to earn money that he could send back home.

In 2012, at age 16, Gomez made his move to the United States. Although the new sights and culture of Door County excited him, this period of enthusiasm was short-lived. Not knowing English and working double shifts as a dishwasher left him emotionally and physically exhausted.

“I was waking up my first year at 5:15 am and returning at 12:15 am, living on four to five hours of sleep,” he said. “Learning another language, managing transportation … It was difficult. Within a month and a half in the U.S., I felt lost, depressed and lonely. I didn’t know what to do with my life. I was constantly working, and I didn’t have any friends.

“I had a call with my mom, and I told her everything. She said, ‘Johnny, you have to continue doing it. You have to remember the great things you wanted to accomplish.’”

Following that conversation, Gomez wrote down five goals to accomplish within the next five years. That, he said, “opened the gates of opportunity, and that’s where my life turned around and my journey began.”

His goals were to go to high school, learn English, support his family both in Nicaragua and in Door County, go to college and graduate debt free.

His aunt helped him to enroll at Sevastopol, and Gomez took advantage of nearly every opportunity the school offered, including participating in clubs and competing as a three-sport athlete. After graduating from high school, he entered Northeastern Wisconsin Technical College to study business, marketing and entrepreneurship.

He later transferred to the University of Wisconsin-Green Bay, opened a new chapter of the Collegiate Entrepreneurs Organization there and became a resident adviser in the dormitories. Throughout his collegiate years, Gomez worked as a marketing-strategy intern and served as one of the flag bearers for the Green Bay Packers’ cheerleading squad.

In addition to being nominated to receive the university’s leadership award and serve as commencement speaker, Gomez was chosen as business leader of the month and graduated in 2019.

The young boy from Nicaragua who once sold mangoes and fireworks never let his entrepreneurial spirit leave him. He recently opened an independent insurance agency in Milwaukee.

“I plan to continue working as an insurance agent, and within three to four years, I have chosen the path to expand my horizons: go to UW-Madison to get my MBA.”

Gomez hopes that his journey and dedication to his studies will continue to inspire others.