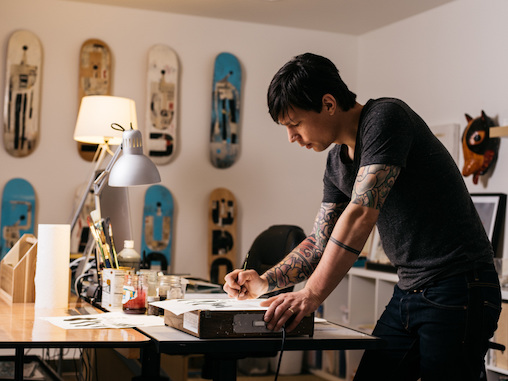 “I don’t remember a time when I wasn’t an artist,” replied Sevastopol alumnus Keith Negley when asked when he decided to pursue his passion in the arts.

The Washington artist, whose impressive works are regularly showcased on a national stage, has roots in Door County as a 1996 graduate of Sevastopol School.

“I remember being in kindergarten and first grade and identifying as an artist,” Negley said. “I never thought of it as a career option, though.”

He attended Sevastopol from his early elementary years through graduation and connected with high school art teacher Jim Rericha, who has since retired. Negley credits Rericha for his inspiration and dedication to the arts.

“Mr. Rericha was instrumental, I have to say,” Negley said. “His confidence in me lit a fire inside, and I don’t think I’d be able to do what I’m doing without him saying it’s OK to make art and care about what I made. He took us seriously and expected us to take [art] seriously.”

It was Rericha encouraging Negley to attend a summer program at the Milwaukee Art Museum that opened Negley’s eyes to career options in the arts field.

“I got to see what an art school looked like and that there was an option for this as a career,” Negley said. “That summer program blew my mind.”

His 2000 graduation from the Milwaukee Institute of Art and Design eventually took him to Seattle for almost a decade. He earned a master’s degree in 2013 from New York City’s School of Visual Arts before moving back to the Pacific Northwest, where he now lives with his wife and two sons.

Having appeared in national publications including the New York Times, Wall Street Journal, Los Angeles Times and dozens more, Negley’s work continues to be sought after and earns accolades from many organizations, including the Society of Illustrators.

Much of his compelling work appears in editorials, but Negley has also expanded his talents into the realm of illustrating children’s picture books.

“In the last five years, I’ve been writing and illustrating my own picture books,” he said. “Picture books never dawned on me. I always thought I’d only be in editorial.”

But the picture-book genre did pique Negley’s interest after his peers frequently commented that his illustrations would fit well there. He soon saw illustrators of children’s books at work and was inspired to begin his own efforts. Negley’s fifth book, The Boy and the Wild Blue Girl, came out in 2020.

“I am working on a new book,” he said. “It will be one of the best books I’ve made. I am super excited.”

In addition to creating art for editorials and picture books, Negley is an adjunct professor and coordinator of the Illustration Certificate Program at Western Washington University in Bellingham.

See Keith Negley’s work on social media and at keithnegley.com.