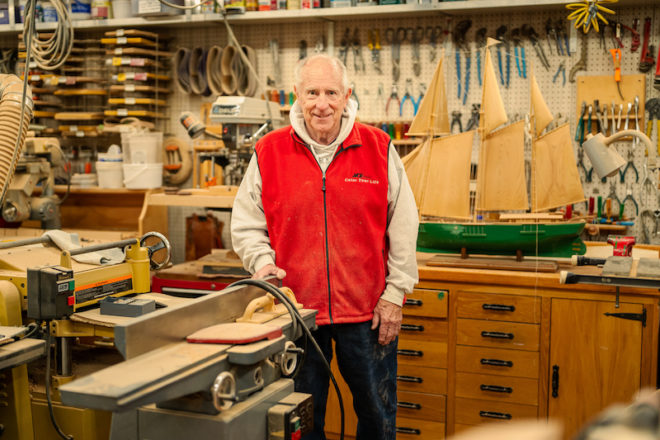 After 60 years in leadership positions, sometimes Dan Austad just likes to be a kid again. The 1959 Sturgeon Bay High School graduate has had a lifelong passion for wooden-model and toy building.

“When some men get into their 50s and 60s, they may revert to doing some of the things that they wish they were able to do as a child,” he said.

The hobby is a welcome respite from his duties as the longest-serving member of the Door County Board of Supervisors.

Austad has tallied 40 years of service in local government, beginning in 1978. He’s also served with the Sturgeon Bay Fire Department for 34 years and as president of the Door County Maritime Museum. Those endeavors are in addition to years of being the face of Door County Hardware, a family-owned business.

Austad considers his life “quite a journey of luck, luck, luck.”

At age 14, he began working at Door County Hardware, a business his parents owned. Then, after heading to Madison Business College when he was 18, Austad’s father died. He returned home from college frequently to help his mother continue to run the family’s hardware store.

“I had no intention of being in hardware,” he said. “I was only a college freshman, and [my father’s death] altered my life. I saw the opportunity there, but it was only a small business at the time. So I served in the Army and took over the family business.”

As a small-business owner, Austad credits his flexible schedule with allowing him to pursue service in local government. He spent 13 years on the Sturgeon Bay Plan Commission before being elected to the Door County Board of Supervisors in 1978. He’s served on that board since then, with a six-year hiatus during the 1990s.

“Between serving on the Door County Board and as president of the Maritime Museum, I must have put in more than 4,000 meetings in my time,” he said.

Much like his family’s history in the hardware business, Austad’s family has long been involved in local government. His father, Russell, served on the county board, and his uncle, Orville, served as Sturgeon Bay’s mayor.

As the District 8 supervisor on the Door County Board of Supervisors, Austad is proud of what he and his colleagues have accomplished through the years. He was instrumental in the decision to construct the Door County Justice Center, the County Highway Department building on Duluth Avenue in Sturgeon Bay, and the ambulance station in Sister Bay. He also helped to lead the effort to build the Veterans Memorial near Sturgeon Bay City Hall that honors Door County veterans who died while on active duty.

“We’ve accomplished a lot together,” he said. “In government, no one person does everything.”

Susan Kohout, a fellow county board supervisor, acknowledged Austad’s dedication to the county.

“Dan lives and breathes county board,” she said. “I believe he spends a tremendous amount of time thinking about it and whatever is going on in it. Dan’s service to the county is exemplary. He deserves our gratitude.”

Austad’s impact on the county has continued through his involvement in its local museums.

“Dan Austad has been a driving force behind the growth of the Door County Historical Museum over the past 40 years,” said Steven Rice, the museum and archives manager. “From spearheading a major expansion drive during the 1980s, to his instrumental role in the creation of the Door County Archives and tireless advocacy on the county board, Dan has a gift for seeing the big picture and shaping the future of Door County history.”

Sam Perlman, deputy director and development manager of the Door County Maritime Museum, credits Austad for his leadership during the time when the organization’s main facility was built and opened a year later, in 1997.

“That project was constructed under the leadership of Dan Austad as chair of the board of directors,” Perlman said.

Austad was awarded the museum’s “E” Award, based on the Army-Navy’s “Excellence in Production of War Equipment” honor during World War II,  last year. The honor is awarded to individuals for “exceptional service and achievement in promoting and preserving the rich maritime history of Door County and the Great Lakes.”