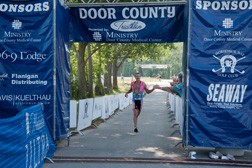 Sverre Falck-Pederson of Egg Harbor has competed in the sprint distance of the Door County Triathlon since its inaugural year in 2006. And, each year, he has placed second in his age group.

Sverre Falck-Pederson will enter the water among 999 other athletes for the sprint distance of the Door County Triathlon July 21, and while he’ll certainly be ready for the competition, it’s unlikely that any of those other athletes will have a story quite like his.

Falck-Pederson of Egg Harbor has competed in the event from its inaugural running and has been extremely successful – yet, not quite great enough. He has taken second place in his age group every single time since 2005.

Falck-Pederson considers these circumstances to be pure coincidence – because he doesn’t even consider himself a triathlete.

“I’m a runner, who likes biking, who does triathlons,” he explained. Falck-Pederson is good enough, however, to contend amongst the best triathletes who compete in Door County every July.

Falck-Pederson has won his age bracket in every triathlon he has competed in except for at the Door County Triathlon, where he has finished as high as third overall in the sprint. But, sure enough, a competitor in his age group finished second overall.

So, what’s keeping him from taking the top spot here in Door County? 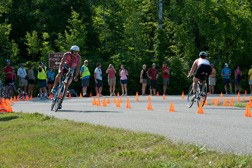 Oddly enough, it may be his steadfast passion for running. Falck-Pederson cites muscle specifity as his biggest opponent when competing with more seasoned triathletes.

With biking aptitude relating to the quadriceps, and running relating to the hamstring, Falck-Pederson finds himself in a see-saw battle between strengthening one end much more than the other.

Regardless of his muscular mêlée, it is Falck-Pederson’s lifestyle that keeps him well groomed to participate at any given time. He has coached cross country at Gibraltar High School since 1986 and is able to keep up with his youthful runners at just about any pace. He also leads a spin class at the YMCA, in addition to swimming once a week, “just to keep a stroke.”

His active lifestyle allows him to confidently assert his readiness for any triathlon, but it doesn’t mean that he fails to admire the most elite triathletes.

“What amazes me are the people that do the Half Iron and Ironman races. I take my hat off to them,” he said. “I help out at the first aid station of the run [for the Door County Half Iron on Sunday], just so that I can see the faces of the good people, reminding me of what I should probably hold myself from.”

While those races may seem a little extreme for Falck-Pederson, there is nothing simple about the sprint distance triathlon, which entails a 1/4-mile swim, 18-mile bike, and 3.1-mile run.

At 64, he is at the top end of his age group (60-64) this year, rivaling younger entrants for that first place position, but if it doesn’t happen this year, there is always 2013. Without a doubt, he will be ready.