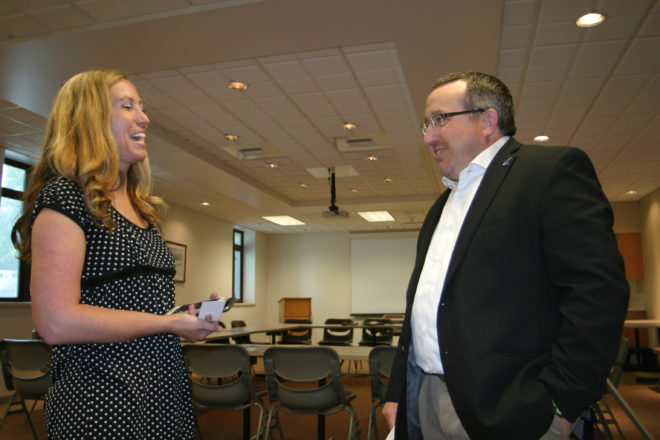 At a listening session held at noon on Aug. 22 at Sturgeon Bay’s City Hall, state Rep. Amanda Stuck (D-Appleton) made a case for her blue-collar roots and why she should represent the 8th Congressional District instead of Mike Gallagher.

The listening session attracted 30 people – many familiar faces at any Democratic gathering – who seemed eager to know more about the candidate. The first thing they learned is that Rep. Stuck is serious about reaching out to people. Before the listening session could begin, a phone on a tripod was set up to video the event for live streaming on Facebook or for those who could not make it to the session.

“My philosophy has always been to reach out to everybody,” she told the group.

Stuck – an Appleton native and graduate of Appleton North High School and the University of Wisconsin-Oshkosh – quickly established her strong connections in northeastern Wisconsin, including a family cottage in Little Sturgeon where she spent many summer days.

“I absolutely love the state, and I love this part of the state in particular,” she said.

Since the 2014 election, Stuck has represented Appleton and Menasha in the state Assembly.

During her introduction, Stuck told her own bootstrap story: She was a single mother at 19 while attending UW-Oshkosh, worked two jobs, eventually graduated with a master’s, worked for the Appleton Housing Authority with low-income Section 8 clients, and went to work for 8th District Rep. Steve Kagen (2007-11) – the last Democrat to hold the office, she pointed out.

“I certainly know the variety of issues a representative has to deal with here,” she said as a way to bring things back to the present.

She embraced her blue-collar background and mentioned her union-card-carrying husband, who is a journeyman sheet-metal worker.

“I think our family knows what most families look like here,” Stuck said, implying that the current office holder does not have that kind of empathy for and understanding of the working class by adding that taking that experience to Washington would be quite uncommon.

That message comes directly from the mid-July press release announcing her challenge to Gallagher.

“Washington isn’t working for Wisconsin families,” she said in that release.

At the listening session, Stuck said that if anyone doubted this, they could look at Gallagher’s legislative achievements and voting record.

For example, she referred to House Resolution 1, or the For the People Act, which passed in March in the House of Representatives, 234 to 193. Gallagher was among the 193 nay voters.

“It was the big voter protection,” Stuck said. “I don’t understand how anybody could be against it, no matter your party … There are plenty of areas where I understand where people can have a difference of opinions. This is not one of them.”

She also mentioned the July passage of HR 397, legislation creating a loan program – not a giveaway, Stuck pointed out – enabling failed pension plans to pay out promised retirement benefits.

“Gallagher voted against it,” Stuck said.

One of the session attendees said that of all the many issues facing us, climate change is the “existential threat,” with voter suppression running a close second. The attendee wanted to know what sort of committee assignments Stuck would seek if elected to the national position.

Stuck responded that she is focusing on getting the job first, but there is one committee she wants no matter what: Energy and Utilities.

“I do think energy is so incredibly important, especially when talking about climate change and what are the things we can do right now,” she said, and then was compelled to add that she was not expressing “warm and fuzzy tree-hugger feelings.”

“This is about jobs – sustainable jobs for our workers and manufacturing base,” she said. “There are a lot of reasons to support green energy.”

Another attendee said accountability is a big issue with Gallagher, adding that she has been trying to meet with him the past three years.

“He’s just unreachable and refuses to have a listening session like you’re doing today,” the woman said. “I think this is just a fabulous beginning.”

“That’s why I wanted to do this,” Stuck said. “I don’t wait for people to come to me. I try to make myself [as] available as possible to everybody.”

Asked about the proposed Back 40 Mine project on the Menominee River – which empties into Green Bay, which makes it a Door County issue as well – Stuck said she wrote a resolution for the state Assembly to show a unified opposition to the Back 40 Mine, but Assembly leadership turned it down.

She also stressed several times during the hour-long session that she wants to be the voice of the people, and she is experienced at bipartisanship, mentioning that she helped to start a caucus focused on bringing the two sides together to deal with particular issues.

Asked about her stance on medical marijuana, Stuck said she supports legalization of both medical and recreational marijuana.

“It’s one of those things nobody should be locked up for,” she said.

The agony of fundraising became apparent when Stuck was asked how she is financing the campaign.

“It takes a lot of money to run for office,” she said. “It’s hard to do it if you’re not independently wealthy.”

She admitted that the necessity of fundraising means reaching out to everyone she can for donations and constantly thinking about raising money instead of focusing full time on issues.

“I think we absolutely have to do the game to win the game to vote on those things and make the changes,” she said specifically about campaign-finance reform.

“Amanda Stuck cannot beat him on that,” she said, adding that is why the listening sessions are so important to introduce her to people who will help by knocking on doors and talking about her and holding events to help raise funds for her campaign.

She sees opportunities for her campaign on the sad fact that so many people are struggling to get by under the current leadership.

“People in the past who might not be inclined to support a Democrat might be willing to listen because so many are struggling,” she said. “It’s time to hold legislators accountable for their votes and what they’re doing.”