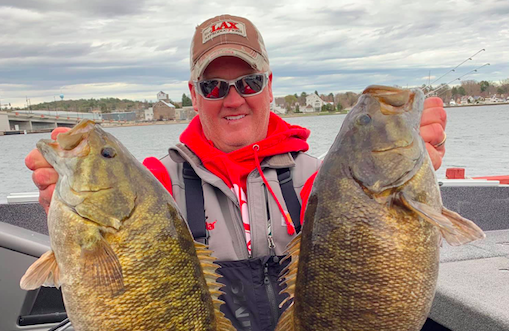 A record-setting weight of 32.76 pounds for five fish on the first day of the Sturgeon Bay Bass Tournament propelled a pair of guides to the winner’s circle.

Door County guide Bret Alexander of Green Bay and southern Wisconsin guide Eric Haataja of West Allis averaged more than 6.55 pounds per bass, which is thought to be a North American record for a five-fish tournament limit on smallmouths.

The heaviest previous tournament limit was 31.80 pounds at an October 2017 event in Ontario, Canada.

Tournament organizer Gary Nault said the total payout was more than $25,000 for the 62-team field, including $8,000 for first place.

Nault said it was rough and windy, with cold water on the May 10 opening morning, but the winds settled down on day two.

Alexander and Haataja held an almost two-pound lead over locals Joe Kaminski and Dave Kruck on the first day, with a better than five-pound average needed per fish just to crack the top 10.

Alexander and Haataja hung on to win by a mere .07 of a pound to capture the victory. Total weight for the leaders was 56.70 pounds.

In second place was Kyle Carpenter of New Franken and Gary Adkins of Green Bay at 56.63, and Cory and Christ Johnston of Canada finished third at 53.57. In fourth place was Brad Huber of Sturgeon Bay and Steve Anderson of Missouri, with 53.09 pounds; and fifth was Adam Rasmussen of Sturgeon Bay and Benny Antoniewicz of Ringle with 52.77.

The big fish of the weekend was an impressive, 7.71-pound smallmouth caught by Alexander and Haataja. The big fish on day two was a 6.72-pounder caught by Brad Huber and Steve Anderson. Two seven-pound-plus and 13 six-pound-plus bass were also taken.

Nault said 538 smallmouth were taken to scales, and every single one was returned live to the water.

“Our tournament has really become a community event, with many attendees to enjoy the tournament, Sawyer Park, the Bay of Sturgeon Bay, and food and refreshments provided by the Pioneer Fire Company,” Nault said.

Next up is this weekend’s Sturgeon Bay Open Bass Tournament, headquartered at Wave Pointe Marina in Little Sturgeon Bay. A total of 135 teams are signed up. Follow the leaders at sbobt.org.

The Coast Guard reported 658 deaths in the U.S. from boating incidents in 2017 (the latest data available), with about 75 percent of those caused by drowning. Of those deaths, about 85 percent were not wearing life jackets.

Top tips for boaters: take a boating-safety course; wear a U.S. Coast Guard-approved life jacket; watch the weather; travel at safe speeds; be vigilant and never boat under the influence.

The buoys of summer
Every spring, Coast Guard crews across the Great Lakes place buoys at select locations to provide users with near-real-time details about weather, wave and water-quality conditions.

You can either check a website for the info or text a buoy directly to immediately receive a return text showing wind speed, water temperature, air temperature, wave height and more. Check out the Great Lakes Observing System’s buoy portal at glbuoys.glos.us.

Leave wildlife in the wild
Every spring the DNR receives calls from concerned citizens who find fawns and other baby wildlife.

In most cases, the best chance of survival for a young fawn or other baby animal is to be left in its natural environment.

However, if you know the mother was killed in a vehicle accident, for example, or something else doesn’t seem right, you should contact a wildlife rehabilitator for advice.

Get more tips at dnr.wi.gov/topic/wildlifehabitat/orphan.html.

Comment on monarch plan
The DNR is asking anyone who is concerned about monarch butterflies to review and comment on the voluntary blueprint that organizations have created to help reverse the monarch population decline.

The Wisconsin Monarch Collaborative seeks to collectively plant about 120 million stems of milkweed in Wisconsin during the next 20 years.

To give comments or receive more information, contact Brenna Jones at [email protected] or 608.267.0797. The public-comment period closes on May 29. Learn more at wiatri.net/Projects/Monarchs/strategy.cfm.

Water levels
As of May 10, Lake Michigan was 26 inches above its 100-year average, and nine inches higher than last year at this time. Levels have increased eight inches in the past month.

The U.S. Army Corps of Engineers says its official records are based on monthly averages, not daily water levels.