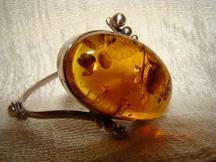 Linden Gallery in Ellison Bay is featuring a major collection of beautiful amber, including works by leading Polish artists Costa, Katy Rybackie and Helena. The show will be on display until July 5.

Amber, a substance commonly mistaken as made from fluid tree sap, is actually a fossil tree resin – a semi-solid, amorphous, organic substance. Although not mineralized, amber is often classified as a gemstone, and good quality amber is used in the creation of beautiful ornamental objects and jewelry.

Known best for its yellow-orange-brown color, amber surprisingly occurs in a range of different colors. Amber can span from an ivory color through a pale lemon yellow, to brown and almost black. Other uncommon colors include red amber (sometimes known as “cherry amber”), green amber, and even blue amber, which is rare and found mainly in the Dominican Republic. In addition to the Dominican Republic, amber is found in all Baltic countries, Venezuela, Russia, Romania, Burma, and in coal seams in Wyoming.

From ancient to modern times, amber has been valued for a variety of reasons. Amber itself was first mentioned in the writings of Theophrastus, a Greek philosopher living during the 4th century B.C. And now, amber stirs the world’s scientific imagination because intact pieces of DNA have been extracted from insects preserved in amber that is millions of years old. 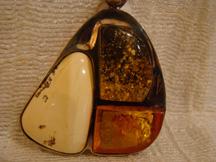 Beyond it’s scientific significance, amber has played a role in many cultures. In Lithuania, an amber necklace was placed around a baby to keep the infant from being kidnapped. In Latvia, bands of amber rings were used in wedding ceremonies to ensure an eternal bond. The Greeks mythologized amber as the tears of Apollo, and the Chinese burned chunks of raw amber as a sign of their wealth.

Linden Gallery is located in the old Lutheran church on Highway 42 and Mink River Road in downtown Ellison Bay. The gallery is open daily; call 920.854.2487 for more information.