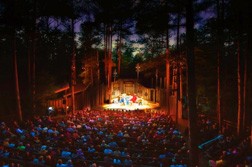 American Folklore Theatre (AFT) has announced its 2014 musical comedy line up for the summer and fall seasons, which will run at the amphitheater in Peninsula State Park and at Door Community Auditorium (DCA) in the fall.

Strings Attached, a world premiere commissioned by AFT and written by Dave Hudson and Colin Welford, is described as a “tuneful tale of tangled twins.” In this case, one twin ends up a ukulele fanatic in Hawaii while the other becomes part of a family banjo dynasty in Wisconsin.

Packer Fans from Outer Space makes a terrestrial re-visit to AFT after a hiatus of eleven years. This musical, by Frederick Heide, Lee Becker and James Kaplan, debuted in 2002 and has since had multiple productions around Wisconsin.

Fan-favorite Guys On Ice will round out the summer season. “This is undoubtedly our most-requested show ever and hasn’t played on our summer stage for seven years,” stated artistic director Jeffrey Herbst.

The Bachelors, by Fred Alley and James Kaplan, makes its debut at DCA in the fall. This play celebrates the realm of bachelorhood through the lens of Stew and John, hapless bumblers in search of love in Madison.

Casting and the performance schedule will be announced in early 2014. Tickets go on sale on April 1 at the AFT box office at the Green Gables shops in Ephraim, via phone at 920.854.6117, or online at FolkloreTheatre.com.