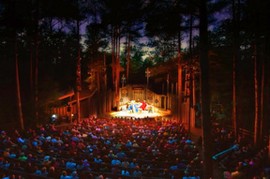 American Folklore Theatre will change their name, but not their mission.

American Folklore Theatre (AFT) announced their company’s new name on a beautiful summer evening at their annual “Raise the Curtain” fundraising event at the Alpine Resort in Egg Harbor on May 25. The event was attended by approximately 200 people closely connected with the theater, including donors, volunteers, and company members.

After the silent auction was closed, plates were cleared away, and the audience turned their chairs towards the stage, Artistic Director Jeffrey Herbst sang one of company co-founder Fred Alley’s most memorable ballads, “Beneath the Northern Sky.” Alley was a key contributor to AFT’s early success, writing seven original shows before his untimely death in 2001. The new name is, in part, a tribute to Alley and his enduring legacy with the theater.

“When Fred Alley died, I think a lot of us thought that what we had done together for a long time already, might be over,” said Herbst. “You never know when you loose someone so close to the organization how things are going to be. We’re trying to forge our own path here in the north woods, with our little theater company, doing original works and again, when Fred died, he had been such a prolific writer for us. I think we were all wondering, ‘Can we sustain that mission? How will we go on without someone who made sure we had a new show every summer, at least every other summer, and in the fall as well. What happens to the mission?’”

“What happens to the mission is,” continued Herbst, “you reach out and start to make new friends, just like Fred did, and you bring new people into the fold and they start to believe in the mission too. And the reason [for a name change] became obvious after Fred’s death because we were out there talking to other theater professionals, people who wanted to write for us, but frankly, they couldn’t really figure out what we were doing because of our name. They didn’t really know what ‘folklore’ was. And that was troubling to me because I didn’t want it to be a stumbling block for all the beautiful work that was going on here. I wanted it to continue. But these sorts of changes are never easy; they are part of the fabric of who we’ve been. Our name is what you’ve attached to us when you tell stories about your experience here. We totally understand that, we do the same thing.”

Beginning officially in January 2015, AFT will debut a new name: Northern Sky Theater. The announcement was met with applause, whoops and hollers.

Changing the name of the theater has been a consideration in the company’s long-range plan for the past seven years. In January of this year, the company announced a decision to change and invited comments and suggestions from the community.

In the following weeks, a task force made up of senior company members, as well as representatives from AFT’s writers, performers, board members, and volunteers, reviewed more than 300 proposed names before settling on Northern Sky Theater and recommending it to AFT’s Board of Directors in April. During the current season, the company will introduce the new name to its audience and promote it throughout the community, and a new logo will be introduced in the fall.

AFT originally began as “The Heritage Ensemble” almost 45 years ago, founded by David Peterson at the University of Wisconsin. The group reorganized and changed its name to “American Folklore Theatre” in 1990, when it separated from the university and incorporated as a nonprofit performing arts company. Over the past 25 years, AFT has evolved from an ensemble performing traditional folksongs and tales to a full-fledged theater organization that primarily focuses on the creation and presentation of original, full-book musicals.

For more information about AFT and their upcoming season, visit folkloretheatre.com or call 920.854.6117.