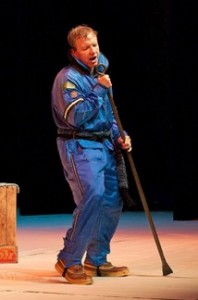 Doug Mancheski in Guys On Ice. Photo by Len Villano.

Wisconsin born and based musical Guys On Ice, produced and presented by Door County’s famed American Folklore Theatre (AFT), will take up residence in The Playhouse at Overture Center for the Arts in Madison from Nov. 29 through Dec. 18.

This charming play tells the story of two ice fishing buddies from northern Wisconsin who talk and sing about life, love, and the one that got away. From their ice-fishing shanty, long-time pals Lloyd and Marvin keep warm with a mutual appreciation for good bait, cold beer, and the Green Bay Packers.

Sold-out houses from Wisconsin to Oregon to New York have embarked on this whirlwind ice-fishing tale. With songs such as “The Wishing Hole” and “Fish is the Miracle Food,” Guys on Ice isn’t just a musical – it’s a journey through the secret culture of northeastern Wisconsin ice fishermen.

Written by Fred Alley with music by James Kaplan, Guys on Ice hasn’t been seen in Madison since 2008 and returns as part of AFT’s statewide Singing Sportsmen Tour featuring both Guys On Ice and Guys & Does.

AFT favorites Doug Mancheski, Steve Koehler, and Lee Becker will be playing Marvin, Lloyd, and Ernie the Moocher (respectively) for the show’s three-week run at The Playhouse.

Guys On Ice features a “Packer Friendly” schedule to allow patrons to catch the game. Tickets, $35 or $30 for seniors and $20 for students, are available at the Overture Center ticket office, by calling 608.258.4141 or by visiting http://www.overturecenter.com.