As Door County’s observation towers appear to be falling like dominoes around us, we decided to check in with the Mountain Park Lookout Tower on Washington Island, the last of the peninsula’s three observation towers that are still open.

But Washington Island’s tower has a slightly different history, and it could be the reason the tower probably won’t be closing anytime soon. 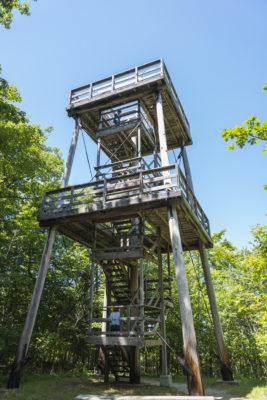 The tower is only about half as old as its brothers in the state parks, built in 1968, but the maintenance and repairs are done by the town, avoiding bureaucratic red tape that comes with state properties.

Public Works Director Jonathan Mann said he doesn’t believe the tower has ever been professionally inspected, but he inspects the structure throughout the year and does maintenance as needed.

“I go up there personally and we put a sealer on it basically every other year – water repellent,” Mann said. He added that the town’s insurer looked at the tower a few years ago and found nothing of concern.

Town chair Gordon Jaeger said any maintenance is paid for out the town budget.

On the other hand, $750,000 in state funds to help reconstruct Eagle Tower required approval through the biennial budget process. Gov. Walker pushed the state park system to become self-sufficient, which has been able to cover operational expenses but has left no money for capital improvements.

It’s unclear whether the tower at Potawatomi State Park, which sees fewer visitors than Peninsula, will receive the same funding for its reconstruction. A statement from the department said they have no plans to reconstruct the tower.

The community and culture around Washington Island’s tower has also cultivated a pride that resonates with the few hundred residents. They voted to build the tower in the first place.

“It just came up at a meeting and the town voted on it,” Gail Larson Toerpe wrote in the history of the 1968 meeting in the Washington Island Observer on July 17, 1997.

The community pitched in. Nearby property owners allowed crews to cross through their land during construction. A few locals helped build the 186 steps up the steep hillside to reach the tower in 1989.

The two towers in Peninsula and Potawatomi are plagued with the public perception of a penny-pinching and negligent DNR, but when something needs to be done at the Mountain Park Lookout Tower, the town has the power to get it done without interference from Madison.

To put it as frankly as chairman Jaeger: “It’s still there. It’s being maintained.”