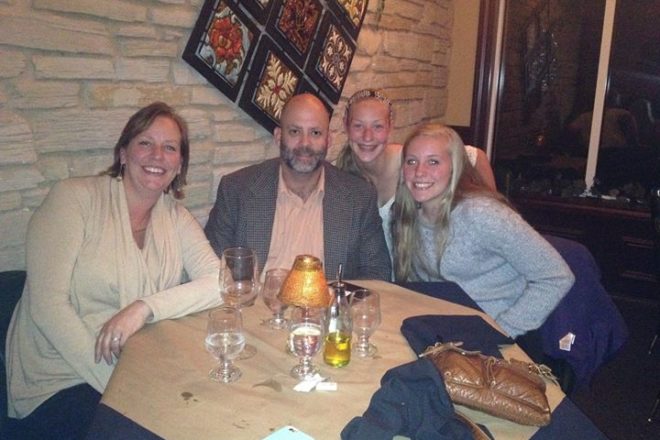 Art Turnquist sat in the recovery room of Aurora BayCare Medical Center in Green Bay waiting for his fiancée, Amy Haleen, to return from her leukemia treatment. He is familiar with the room. It looks just like the one he was wheeled into after surgery to remove his own malignant brain tumor.

“We’re definitely in the thick of things,” said Turnquist over the phone from the hospital. “Just very recently I was diagnosed with brain cancer and treatment is going fairly well, but shortly thereafter Amy got diagnosed with leukemia.

“It’s difficult, it’s draining. I’m going through radiation myself and I want to be there for her but I’m not 100 percent myself. So we’re waging a war over here.”

This war comes after Haleen’s battle with stage three breast cancer three years ago, which she overcame in 2015.

“She was supposed to have six chemo treatments and at the middle scan the cancer was gone,” said Turnquist. “In three treatments her body had let chemo do what it does…”

The phone went quiet for a few seconds. Haleen was brought back into the recovery room.

“She just woke up,” said Turnquist. “She just gave me a thumbs-up. She’s doing ok.”

Communities such as northern Door County are like webs where every strand is pulled tight. They weave through each other, connecting the farthest corners through a network of relationships. A vibration sent through one is felt by all, and cancer has thread itself through the fabric of this community, shaking the lives of all who call this place home.

Residents painted their world orange at the death of Bo Johnson in 2012 after his fight against extramedullary acute myeloid leukemia. Gibraltar Schools shook again when Nancy Keehan, administrative assistant at the school, passed away last year after a long battle with cancer.

“Tessa was like another child to me,” said Haleen over the phone. “She was very much a part of our family and she’s a big motivation of my fight right now. A lot of what I’m doing now is for her.”

This small community has held the disease close while watching friends and family leave its hallways, sidewalks and homes forever.

“I can’t speak for everybody, but it’s kind of a somber moment around the community right now,” said Turnquist, speaking about the reaction to Erickson’s passing in light of his own family’s battles. “The truth is that a lot of us are getting cancer up here at a fairly alarming rate. For the life of us we can’t quite figure it out. The more this goes on, the more people are affected.”

But many have pushed that somber moment aside and rallied in fervent support of their community members.

At Husby’s Food and Spirits in Sister Bay, where Turnquist and Haleen have both worked, dollar bills once pinned to the ceiling were taken down and donated along with half of the restaurant’s sales after a May 22 benefit, amounting to $14,542 for Turnquist and Haleen.

Amie Brey, Haleen’s close friend, and other women in the community are even planning a wedding for Haleen and Turnquist on Jan. 7 next year because they haven’t had the time to do it themselves.

“They’ve been engaged for so long and they haven’t had an opportunity to make plans for a wedding,” said Brey.

Horseshoe Bay donated the space for the wedding and Brey hopes to have other things donated to take any more stress away from the couple.

“It’s been amazing how the community has come together to help us,” said Haleen. “I don’t know that we could do it without the community’s help.”

“It’s a testament to Amy. She’s been here almost 15 years and she’s made a lot of relationships and the community just loves her,” said Turnquist. He let out a quiet laugh, saying, “Because I’m not a complete idiot, I fit in too.”

But in the recovery room in Green Bay, Haleen can look at Turnquist sitting by her side, understanding what she is going through in a way that few people can.

“I can’t imagine what the two of us would be like if we didn’t have each other,” said Turnquist. “She’s been as strong as I need her to be and that’s saying quite a lot.”

After a full recovery from breast cancer, both Haleen and Turnquist can look at their battle with a confident familiarity and Turnquist is assured that she will pull through as she did in 2015.

“I expect a full recovery from her in the next three to four months. I expect her to be in complete remission of leukemia,” said Turnquist.

“I say that experience going through [breast cancer] has made me more aware of what’s going on in my body,” said Haleen. “Knowing that you can beat that once definitely makes me feel positive that I can do it again.”

But for Turnquist, the story isn’t as clear.

He doesn’t like to look too far ahead, but talks candidly about what the future may or may not have in store for him.

“There’s no doubt that this is a long haul for me,” said Turnquist. “Mine is, although it was small, it still was a malignant tumor and when it was in my head it was fairly aggressive in behavior. My future is a bit more murky. That is the reality and you have to accept it and start rolling with the punches or the punches will get you.”

Turnquist puts the brain surgery aside with a stoic strength. He embraces long nights in the hospital waiting for Haleen’s procedure to end or his own to begin and looks back toward his community with a thankful longing to be there again.

“The community has our back right now, the way I see it. I don’t have the time or the energy to fight Amy’s cancer, my cancer and be a part of the community in an effective way,” said Turnquist, wishing he could do more for those who have supported him and Amy.

But the community is here, trading sadness for optimism and offering time, money and love for two people who would do the same for them.

They plant their feet firmly and grab the web of their community, refusing to let go no matter how much it shakes.

A fundraiser for Amy will be held at Lakeshore Adventures on June 16 from 9 am – 5 pm with free zip line tours with a $25 donation. Casey’s BBQ is also providing food for a donation. For more information, contact 920.839.2055 or visit zipliningdoorcounty.com.

A fund has been set up at North Shore Bank in Sister Bay to accept donations in support of Art and Amy’s treatment costs and support for their family.