Let me start this review by saying I really wanted to like The Ghosts of Door County, which had its premiere Friday night at Sturgeon Bay Cinema and plays there through Halloween. 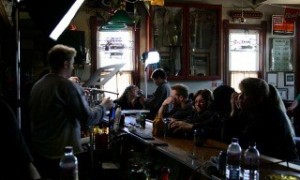 However, I have to report that the documentary featuring the Southern Wisconsin Paranormal Research Group investigating 10 reputed Door County haunted sites in 10 days is, ultimately, too slight for the big screen, and perhaps even too slight for the small screen.

I appreciate that it was made by people doing it for the love of the project, however, I’m afraid it shows, not so much in the technical aspects of how the movie looks, but in the overall anticlimactic presentation.

For example, the group gets the bum’s rush from the Shipwrecked, and even though the place seems to be generating some potential for investigation, they just leave and rule their Shipwrecked investigation inconclusive. Huh?

There were a lot of little things that added up against a film that was shot in 2007 and just now is making its theatrical debut six years later. Some “witnesses” are identified with titles as they speak, some are not. One title uses the word “of” when “have” is what is meant. At least one Door County person’s name is misspelled in the end credits. The banter between the investigators is mostly inane. And someone should have told the lead investigator that you don’t put your feet on the furniture. I think most people have a visceral reaction when looking at the bottom of someone’s shoe over and over again.

I won’t reveal any more conclusions to the other investigations, but I will name the sites the group visits:

9. Sister Bay Moravian Cemetery (the group refers to it as Hill Road Cemetery)

For more on The Ghosts of Door County, visit ghostsofdoorcounty.com.

The group visited the county for 10 days and visited sites from Washington Island to Frank Murphy Park, their southernmost “haunted” site. Their home base is The Landmark in Egg Harbor, which they also investigate.

The Ghosts of Door County, I fear, is too slight for the big screen. I don’t think my expectations for the documentary featuring the (title of group) investigating the ghost stories of Door County