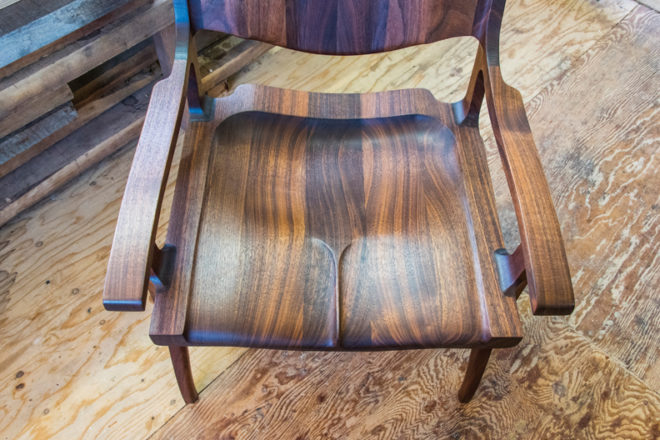 Michael Doerr talks as straight as he sits. Ask him what makes a good chair and you’ll get a straight answer, and a bit of advice.

“Comfort. The primary function of a chair is comfort. If it’s not comfortable, don’t buy it.”

It’s advice one would do well to heed, coming from a man who has designed and built more than a thousand pieces of wood furniture in his lifetime. From his early days in a windowless, low-ceiling hog shed in Cedarburg to his current spacious woodshop on County Road M west of Potawatomi State Park, Doerr has continued pushing the boundaries of his craft, focusing on aesthetics and comfort while blurring the line between furniture and art. 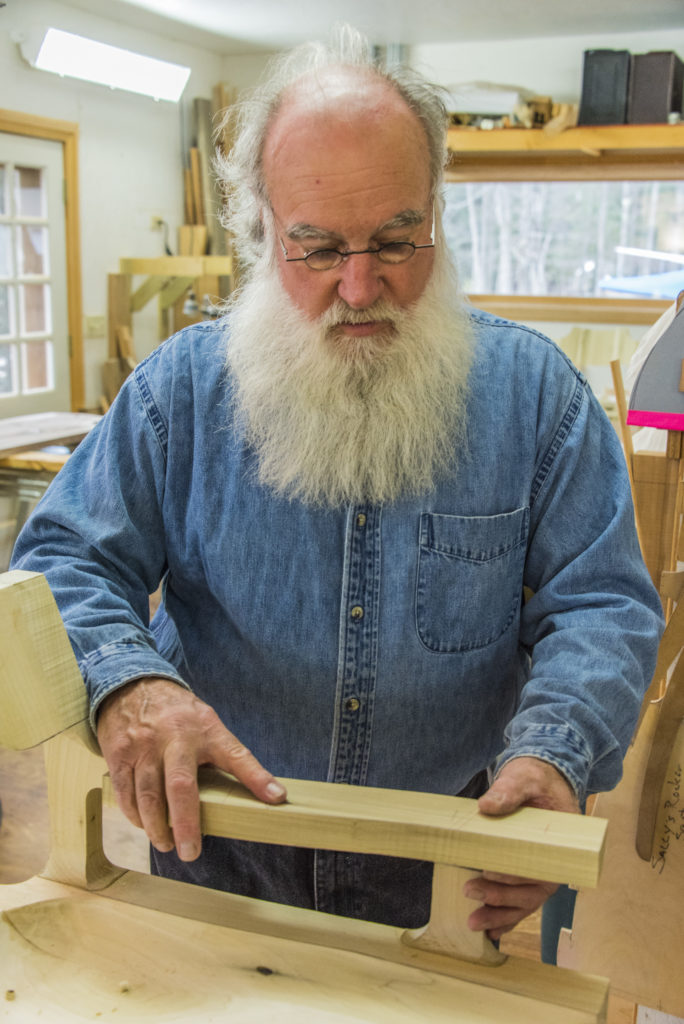 At an age when most men consider retirement, Doerr is still dreaming of possibilities. He has a well-established line of furniture and an even longer list of returning clients, but that hasn’t stopped him from reaching further to incorporate more “one-off” creative pieces into his collection.

“Maybe more speculative things,” he muses. “I want to work with that torso…I just want to be able to do more sculptural things.”

The “torso” he refers to is one design concept of Doerr Woodworking furniture — the shape of a chair back, broad at the top and curving gracefully inward — modeling its inspiration, Doerr’s swimmer wife of 35 years. It is just another example of the way Doerr has used the past 30 years to merge his inspirations — the sculptural quality of furniture by the late, great woodworker Sam Maloof, along with the simple curves of the human body — to craft a successful self-made career in woodworking.

It is a craft he came to by way of his passion for boats and sailing. With no family history in woodworking — his father and brother ran a business making electric motors in Sturgeon Bay ­— Doerr took a friend’s suggestion to get into the business. At age 25, he got his first real woodworking experience building wooden boats under legendary wooden shipwright Ferdinand “Red” Nimphius Sr. in Neshkoro, Wisconsin.

The German-born Nimphius designed and built wooden boats from the 1920s until his death in 1999. According to author Jim Dean, writing in the April 1991 issue of The Wisconsin Sailing Connection, Nimphius was best known for his 40-foot ketch Fleetwood that won the Chicago-Mackinac race five times, along with a half-sized replica of a 16th century Dutch frigate.

For three-and-a-half years in Central Wisconsin, without air conditioning in the summer or heat in the winter, Doerr worked his way up from menial jobs in the shop to shipwright, putting out two boats in that time — a 47-foot banks type schooner and a 65-foot half model of the 1597 Rote Lowe.

The original plan was to start building small boats on his own. But somewhere during his three years at Nimphius Boat Co., Doerr’s father handed him a book by Maloof, considered one of the greatest woodworkers of modern time. In those pages, Doerr was inspired to shift his career trajectory.

“I gave up on boats as I slowly started building furniture in about 1982,” Doerr says.

In the three decades since, Doerr has become a straight-talking artisan of comfort who, since 1995, has called Sturgeon Bay home.

Though time has passed, Doerr’s passion for woodworking has not. At 63, he maintains much the same schedule as he did when he incorporated Doerr Woodworking in 1987 — spending 8- to 10-hour days in his woodshop, sawing, chiseling and gouging away at a one-year backlog of custom furniture orders.

From chairs and stools to tables and cabinets, Doerr’s designs are united by three elements:  the careful selection of wood, merging of function and comfort, and the flow of the unbroken line.

A portion of his woodshop serves as a showroom for his work. Photo by Len Villano.

This cabinet incorporates a variety of wood, all handselected by craftsman Michael Doerr. Photo by Len Villano.

Doerr works with exotic and local woods to craft his furniture. Photo by Len Villano.

Cabinets, tables, chairs and cheeseboards are just a few items that make up his portfolio. Photo by Len Villano.

At any given time, Doerr has a year-long backlog of custom furniture orders. Photo by Len Villano.

Michael Doerr harbors one belief in furniture: comfort over aesthetic. He seemlessly blends both in his creations. Photo by Len Villano.

He found early success at art and outdoor shows, eventually being accepted into juried shows on the East Coast, including the American Craft Council, Philadelphia Invitational Furniture Show and the Architectural Digest Design Show. He continued growing in his craft, even taking classes from Maloof at Anderson Ranch Arts Center in Colorado. In 2000, he appeared on the front cover of the national trade publication Woodshop News, which helped carve out the newest chapter of his woodworking career — that of teacher.

“A guy from Arizona called and asked, ‘Do you ever teach people how to do this?’ and I thought, well, I’ve never thought about this,” Doerr recalls. “I said, ‘Let me think about it,’ and called him back a few days later and said, ‘Yeah, I think I can do that.’ I told him that I’d never done it before and he said, ‘That’s okay, I’m willing to learn from you.’”

Since then, Doerr has brought his intimate knowledge of the craft to the Arrowmont School of Arts and Crafts, University of Michigan, Northern Michigan University, Connecticut Valley School of Woodworking and Penland School of Crafts, where he taught Maloof’s good friend and nationally famous potter, Cynthia Bringle.

“Teaching there is what taught me that I was successful,” Doerr recalls.

Today he primarily teaches out of his Door County woodshop, walking students through a system that has evolved since he taught himself how to make chairs in the early ’80s.

With a nod to his old-school approach to woodworking (he easily brushes off the idea of computerized routers), Doerr is as straightforward with his students as he is about his career and also as giving of his time.

For Sturgeon Bay resident Paul Borawski, whose first three days in Doerr’s class were 11 hours each, the amount of time and effort that went into learning how to build a one-of-a-kind chair from a master craftsman was well worth it. 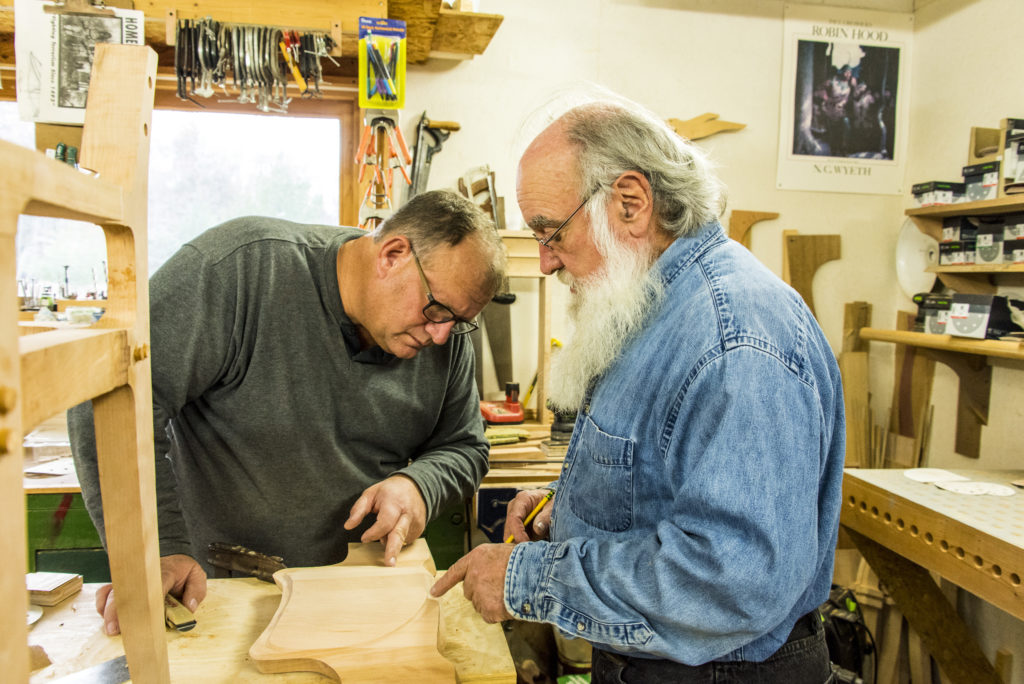 “He’s passionate about what he does,” Borawski said. “I think he has a very deep knowledge of what’s going on. He knows wood and how it behaves, he knows joinery, he knows the power tools, sculpting wood and finishing wood — he has 30 years of experience. He still loves what he does and that comes pouring out in his approach to interacting with you. I think he was excited that we were excited to learn from him.”

But students will also learn the most vital aspect of Doerr’s business as a woodworker and teacher:  the belief that an artisan sells himself as much as he does his creations.

“That’s what I sell — I sell myself making you a chair,” he says. “I’m the craftsman; you get to meet me, I get to make you a chair, you go off and we hopefully build a relationship.”

In his free time, Doerr can be found playing around with his 16-foot Boston Whaler in Sturgeon Bay. In Door County, Doerr’s work is represented by Martinez Studio in Jacksonport. For more information on Doerr Woodworking, visit MichaelDoerr.com.