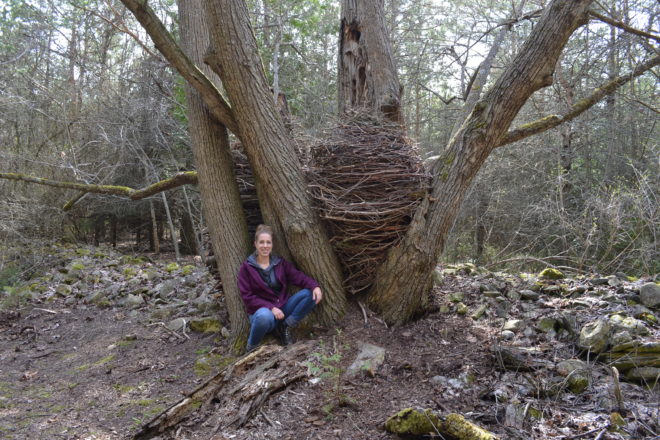 Jodi (Brey) Gonzales with her newest environmental artwork, “The Giving Tree.” Gonzales created the dual sculptures Earth Day weekend as a way of honoring childhood memory, the land and self. Photos by Alyssa Skiba.

On April 22, millions of seeds and tree saplings were given a chance at life through plantings across the nation in honor of Earth Day. But in one small corner of the Door Peninsula, it was a towering old tree that was given its own special recognition.

Hidden among a Liberty Grove forest thick with cedar trees, this tree was transformed from its prior hidden state into a one-of-a-kind piece of natural art honoring the childhood memories of a Door County native whose imagination took root among its branches.

Like most young girls, Jodi (Brey) Gonzales’ imagination was encouraged by the rustic adventures in the pages of Little House on the Prairie and like the young Laura Ingalls Wilder, found a place among her family’s land to live those adventures out. That land has been in her family since the mid-19th century.

“When I was a little, little girl, there was still the old house here and my grandpa took care of the property so while he did that, I would go sit in this tree,” Gonzales said. “…It’s just this big, old tree that’s always been here with great limbs to climb on when you’re a kid and to sit in. I was huge into Laura Ingalls Wilder so I would pretend I was the prairie girl on some wild adventures. I’ve never really gotten too far away from that imagination.”

All of Gonzales’ life, that large tree stood out among the clear-cut land where her family once farmed potatoes until the young Gonzales and her grandfather transformed it into a mini forest by planting trees. As she grew older, so did the trees. And while Gonzales became an integral part of the Door County arts scene as an adult, serving as outreach and gallery director at Peninsula School of Art, grant administrator for the Peninsula Arts Association, and a featured artist at Edgewood Orchard Galleries, she lost track of her tree’s location as the cedars she and her grandpa planted slowly overtook the land. But it did remain part of her memory.

“For a while I had thought about finding the tree because I knew the general sense of where it was but our trail cut through other parts of the property,” Gonzales said. “Part of me for the longest time was like, I kind of want to just let the tree be where it is and leave it be this happy place.”

Then, last winter (nearly a decade after moving to Tucson, Arizona where she works as a museum curator and art therapist/yoga instructor), it finally appeared to her during a walk in the woods.

“I was standing in the right place and saw it and thought, ‘Oh! It’s time to see the tree!’” Gonzales said. “I was with my husband and we came trotting and I went right to it like it called me…when I saw the space I knew I wanted to do something with it.” 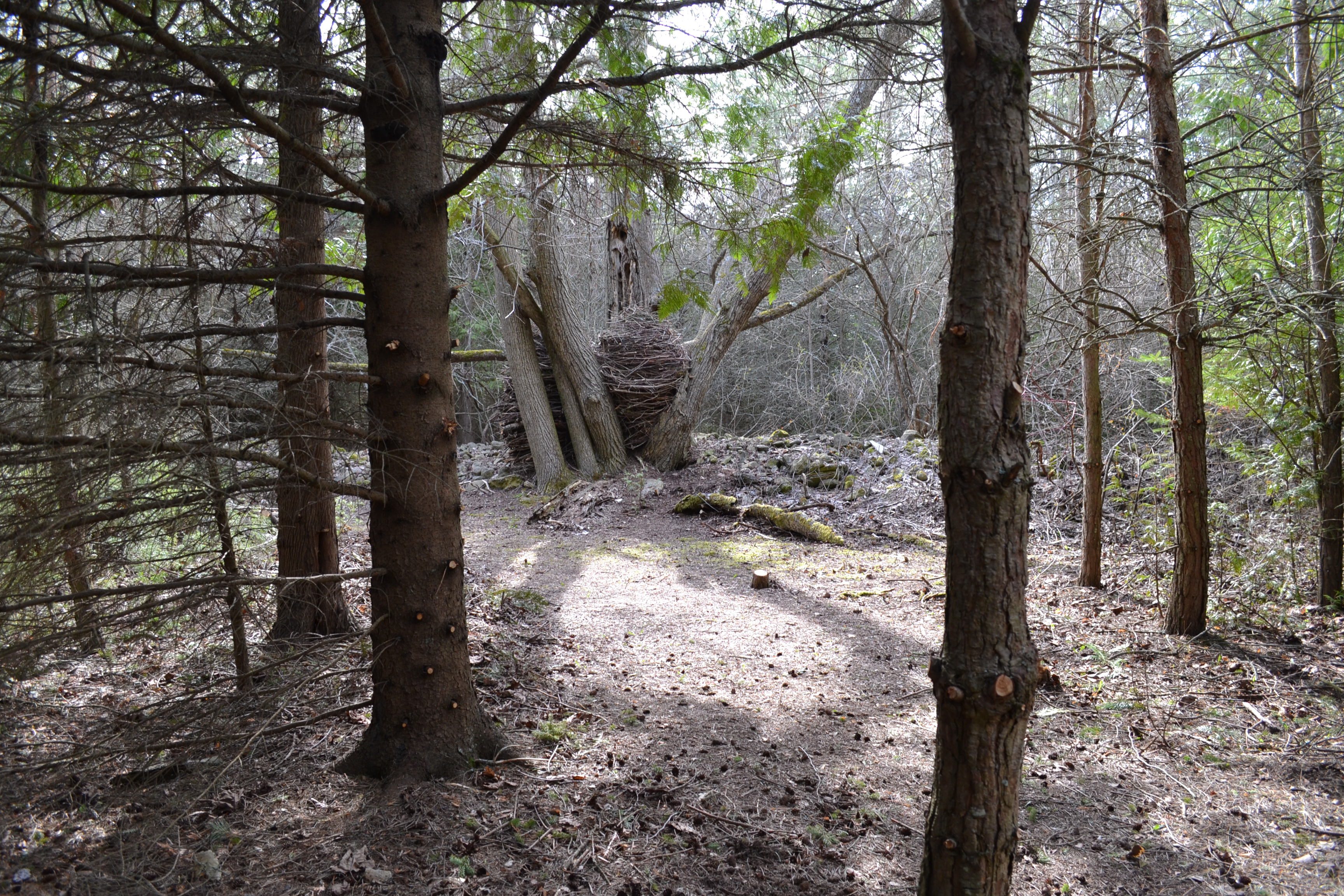 “The Giving Tree,” by Jodi Gonzales.

Drawing inspiration from her history creating environmental art, Gonzales knew exactly what that something would be. Last December, she and her husband cleared the overgrowth surrounding the tree and created a pathway to the new clearing. The dead and discarded branches and vines found new purpose Earth Day weekend when Gonzales returned for a visit and dedicated 10 hours of her weekend to organizing, compiling and weaving these scraps into two monumental nest sculptures.

Titled “The Giving Tree,” the structures represent the evolution and resolution of childhood memories.

“It’s definitely this metaphor of forgotten childhood memory kind of stored in this place and the mind kind of forgets things, so to clear a new path into it and open the space and reorganize it and create, just an honoring I guess,” Gonzales said. “I’m also an art therapist and yoga instructor so there’s a heavy amount of that playing in as well, playing with metaphor and transforming things and working with energy. Also it was fun to climb around in the same tree.”

Reflective of her art therapy and yoga background, Gonzales considers herself a process-oriented artist. Drawn to the movement and repetition aspect of stacking, bending and placing the sticks, “The Giving Tree” has come to represent not only a connection with the land, but a connection with self and time as well.

“I needed to do this piece,” Gonzales said. “There was something about how it was so overgrown. There’s nothing specific I needed to work out through the process but I felt like I needed to be alone with my thoughts, kind of a wisdom of aging, returning to place kind of thing, reflective…it’s an odd coming-of-age piece.”

“The Giving Tree” is located on private property and is not accessible to the public. For more information on Gonzales, visit artyogawellness.com.