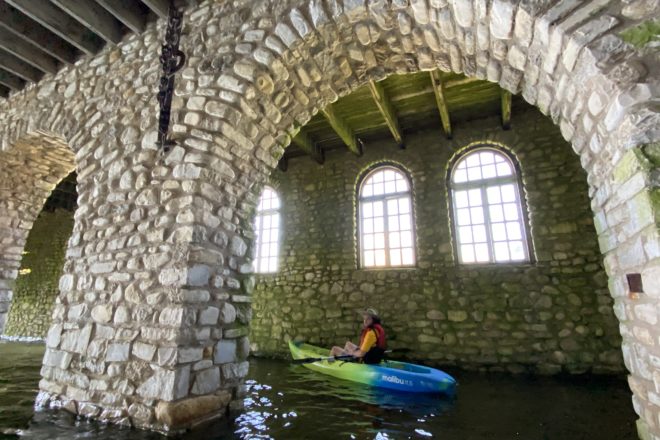 When Icelandic inventor Chester Thodardson bought Rock Island in the early 1900s, he had intended to use the island as his own personal getaway and a location for decadent parties. Photo by Maddy Schierl.

Paddling around beneath arches of intricate masonry, I imagined that I could hear the clink of glass and the rustle of people coming from the boathouse above me. Which sparkling socialites once mingled in the large room above my head? According to our tour guide Matt Lapp, when Icelandic inventor Chester Thodardson bought Rock Island in the early 1900s, he had intended to use the island as his own personal getaway and a location for decadent parties.

I lingered for a moment, floating in the cool, quiet water and marveling at the elegant stone construction that surrounded me before kayaking out again into the sun.

The landscape of Rock Island – now a state park – is as naturally unkempt as the boathouse is painstakingly constructed. Picturesque yet minimalistic campsites dot the circumference of the island. Other highlights include a lighthouse, pet cemetery (yes, you read that correctly) and secret sandy beach. Unfortunately the Department of Natural Resources has closed the park to all visitors for the season, but it still makes for a great paddle around the island.

It was a dazzling day, with hardly a ripple in the water and not a cloud in the sky – the perfect day to explore Washington Island and beyond with Island Adventure Company.

Before we left on the kayak tour, I took a spin on one of the company’s electric bikes. I had never been on one before, so I was excited to give it a try. It turns out, the geography of Washington Island lends itself perfectly to electric biking. I was able to enjoy the experience of pedaling along the winding, rolling roads without feeling absolutely winded on the hills.

Island Adventure is located in a building that’s only a couple hundred feet from where the ferry lands. Once a restaurant, it’s now been redone and redecorated by Island Adventure Company owners Jacob Gransee and Matt Lapp, and the building has taken on new life.

That’s how it usually goes on Washington Island: Buildings have their own layers of history baked into the very beams. There’s no way to fake the atmosphere of authenticity that exists inside a building that’s been recycled many times.

For most businesses on Washington Island, the challenge is keeping up-to-date and modern while simultaneously holding on to the nostalgic charm that permeates the island.

“We’re trying to keep everything we do very authentic and genuine, while also being sure we have our finger on the pulse,” said Gransee, who lived on the island for a while as a child when his mother was a teacher.

Island Adventure Company offers small-town charm but also lives up to its moniker. Visitors have access to both state-of-the-art equipment and personalized customer service. Gransee’s mom, Connie, helps out at the front desk and is known for providing detailed suggestions and recommendations to visitors. When I arrived, both Gransee and Lapp taught me The Wave: the island’s customary (and nearly compulsory) friendly greeting.

There’s a mode of transportation and a form of entertainment available for every type of adventurer: There are UTVs, electric bikes, stand-up paddleboards and kayaks available to rent, plus three different kayak tours to choose from. The Point Grille, Island Adventure Company’s restaurant, is located onsite as well because – as we all know – adventuring tends to work up an appetite.