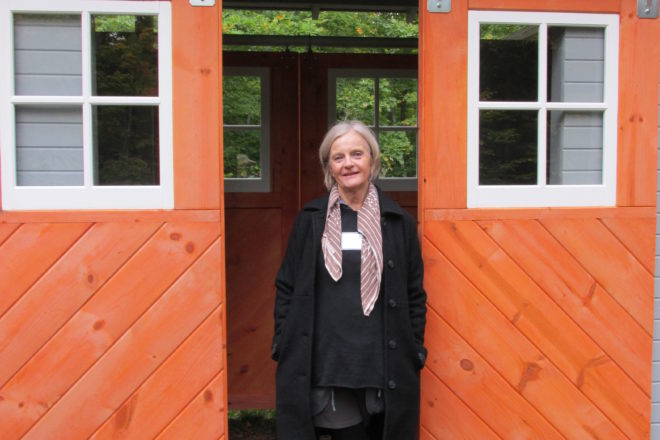 Friends of Amanda DeWitt said she was best described with one word, authentic. Photo by Jude Genereaux.

Amanda DeWitt grew up an army brat, bouncing from Washington D.C., to California, to France, to Japan, so it’s not surprising that she made an impulse decision to abruptly change her life’s course before finishing college.

She was studying journalism at the University of Illinois in Champaign when she dropped out after her junior year to follow a divorced silversmith, Tom DeWitt, to Door County. They married and she too became a silversmith, learning at his side. The marriage wouldn’t last, but for DeWitt, Door County and her new career did.

The admired silversmith who hammered in Door County studios for more than 40 years died Saturday, Feb. 17, at age 69, after a short battle with a liver-related autoimmune disorder.

DeWitt was part of an influential coterie of artists who carved a larger niche for the arts on the peninsula in the 1970s. It was a time when the back-to-the-land movement brought waves of young adults from the city to the country (the county’s population swelled by 5,000 people in the decade). They sought a simpler life, and a simple life is what DeWitt found.

She and Tom lived in a small home with no running water, slowly adding to the home as they forged careers as artists alongside other young artists who would eventually convince Door County to embrace arts as part of its essential character.

“It was an exciting time,” DeWitt said when I visited her studio in 2004. “There weren’t many of us up here yet, so it was a close-knit arts community. Edgewood Gallery had just opened; there were Chick Peterson, Jim Ingwersen, Abe Cohn, John Dietrich, Leon Statham, Ruth and Phil Philipon, Dave and Jeanne [Aurelius] at Clay Bay Pottery, and Anne and Minnow [Emerson] at Edgewood Gallery. We were all really supportive of each other.”

Years later she recalled being struck by her first encounter with the legendary Peninsula School of Art founder Madeline Tourtelot, an eccentric connector who inspired a generation of creatives.

“We probably met through Madeline Tourtelot,” said Anne Emerson, who showed DeWitt’s work many times at her gallery. “Madeline really brought people together. She embraced young people. She created a circle of artistic people and that included Tom and Amanda.”

DeWitt’s friend Jude Genereaux said the members of that arts era had a rare work ethic and dedication to craft.

The DeWitts bought an old boat from Palmer Johnson, fixed it up, and sailed it around Lake Michigan to sell their work at craft shows around the lake. When they divorced she continued to study however she could, earning new respect and admiration on her own. She created signature silver and gold jewelry, hammering each by hand for more than four decades, often with National Public Radio on in the background.

“Her work expressed a simplicity – simple lines, not chunky and gaudy,” Genereaux said. “It probably expressed the way she is.” 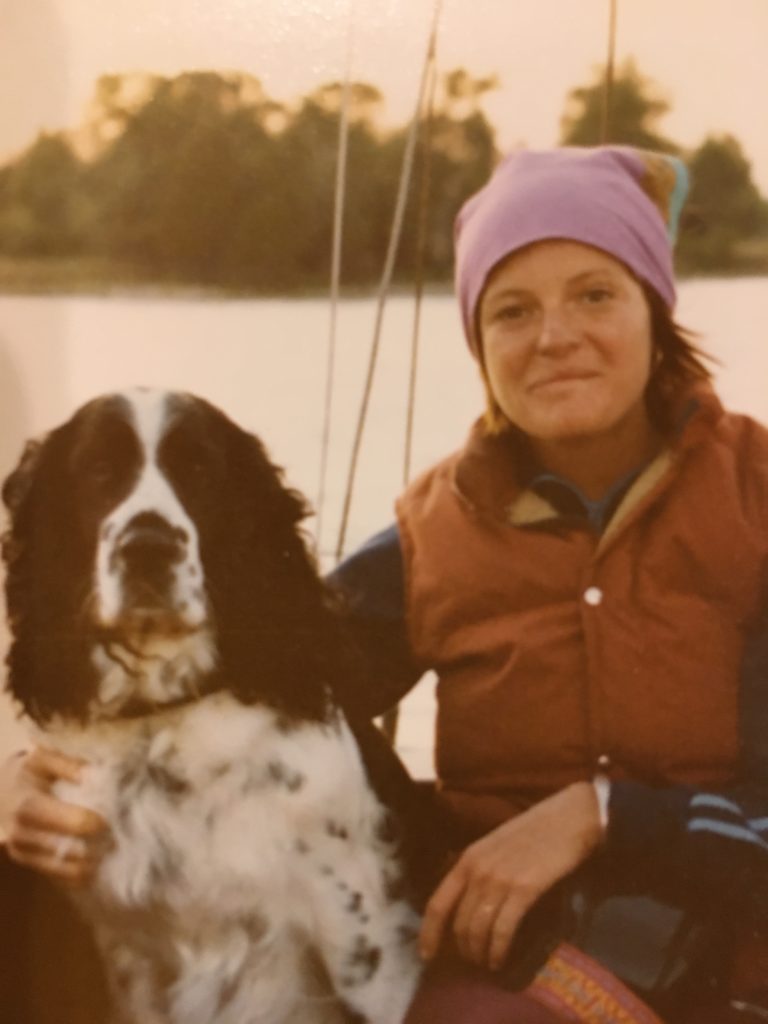 Amanda DeWitt loved dogs, taking in old dogs when their owners couldn’t care for them anymore.

DeWitt said her work was inspired by living in Door County and daily walks in the woods.

“She wasn’t trained to be a jeweler but she had a wonderful artistic sense,” Emerson said. “There was a purity to her work. She wasn’t skipping around following a trend this year and another next year. The minute you saw something you knew it was hers. I know people who every time you see them they’re wearing Amanda DeWitt earrings.”

After her divorce Tom moved to the Cayman Islands, and DeWitt raised their daughter, and later two boys from another marriage, largely on her own.

“She is just a can-do person,” Genereaux said. “She just took charge of her life and raised a wonderful family.”

Her friends admired her positivity and quirkiness. In 2009 she led a drive to allow beer and wine in Ephraim. She didn’t drink or own a restaurant, she just thought it would be good for business. It didn’t pass, but it laid the groundwork for Wisconsin’s last dry town to become wet in 2016.

She was often accompanied on her walks in the woods by her dogs, of which there were many through the years, as she adopted old dogs that others could no longer or didn’t want to take care of.

In 2011 she fell in love with Washington Island, calling her daughter Lillie Conrad after a spring trip there to announce that she was going to buy land on the island and build a house. Her daughter told her to give it some time, think it over.

“A week later she called and told me she bought the land,” Conrad said.

Her jewelry production slowed dramatically as 40 years of hammering took its toll, but she found new creative outlets. DeWitt quickly endeared herself to the island community, penning the women’s club column for the Observer, showing jewelry at the Red Cup, and diving into theater at the Trueblood Performing Arts Center. She had never performed before moving to the island, but was soon stealing scenes on the stage.

In 2011 she told writer Gary Jones that she was surprised to stumble into a creative career.

“I am very artistic, but I never knew you could do something that you like to do to make a living!” she said.

DeWitt made more than a living. During nearly five decades in Door County, she made an inspired life.

“It all depends on how you judge success,” DeWitt told me in her shop during that interview in 2004. “If you judge success by whether or not you’re getting rich, then no, I’m not successful. But I’m successful in life. I’ve been able to raise my kids and do what I love, and provide us with the necessities in life.”