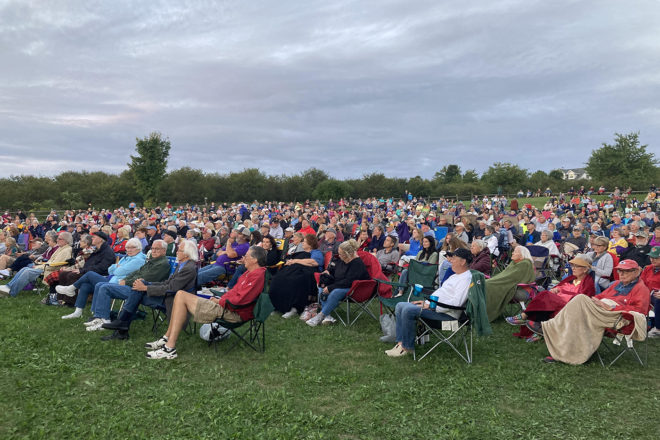 Concertgoers lined up in curving rows of lawn chairs to watch the show. Photo by Sam Watson.

Set at the foot of a grassy hill next to a cherry orchard, the Peg Egan Performing Arts Center (PAC) is a quintessentially “Door County” concert venue. It’s a take-your-own-chair affair, so attendees can choose their level of involvement in the concerts. At an August  performance by the Blind Boys of Alabama the crowd formed something of a gradient: Hardcore fans staked out spots ahead of time at the front, and the more casual listeners stuck to the back.

It’s a family-friendly venue where kids have space to run around and offer parents the option of kicking back with a picnic dinner (or a few beers).

On this particular August evening, the PAC was packed. If I saw the crowd without hearing what music they were listening to, I never would have guessed that so many people would spend their Sunday night listening to traditional gospel music. The genre isn’t for everyone – or at least that’s what I thought before seeing the Blind Boys of Alabama play the Peg Egan PAC.

Although the six performers are indeed blind, they’re a bit older than boys, with a few members touting white hair and raspy voices. Paired with their seasoned sound, it’s clear they’ve spent years perfecting their art.

But the group has been around longer than its current members have been a part of it. Its unlikely founders were children who sang together at the Alabama Institute for the Negro Blind during the late 1930s.

Since then, different iterations of the group have been modernizing traditional gospel tunes by combining harsh, throaty vocals with guitar, organ, bass and drums. In doing so, they’ve created imaginative originals and remixed traditional tunes in their own style.

The vocals were the stars of the show, sending a rough Southern twang reverberating through the open-air amphitheater.

Toddlers bobbed on their parents’ shoulders, dads danced goofily as their teenage children cringed, and older folks tapped their feet. Plus, furry family members could tag along, too – or sing along if they were feeling inspired. (The Blind Boys’ cover of “Amazing Grace” made one yellow lab in the crowd break out in a howl.)

Though the Blind Boys were a far cry from Alabama, they seemed to be right at home at the PAC. And, as the summer draws to a close, a few more artists will make the stage their home as well.

Girl Named Tom, a folk trio of three siblings, will perform Aug. 28, 7 pm. On Sept. 4, 6 pm, the Door County All Stars will include the bluesy beats of Cathy Grier & The Troublemakers; the jazzy, seasoned sound of Big Mouth and the Power Tool Horns; the blues-rock fusion of the Pete Thelen Band; and tunes from local favorites Paul Taylor & John Lewis, as well as Dorothy Scott and the Peace Keepers.

All shows in the concert series are free. Find out more at eggharbordoorcounty.org.