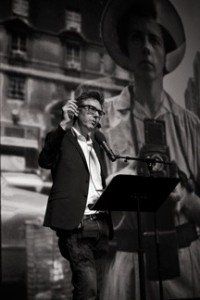 July 12, Door Community Auditorium (DCA) will present Reinventing Radio: An Evening with Ira Glass. Ira Glass is the host and creator of This American Life, the award-winning public radio program that draws almost 2 million listeners per week. Like his radio show, Glass is known for his shrewd journalism, compassionate insight, and wry humor. At DCA, Glass will speak with his trademark wit about This American Life and how it’s put together: what makes a compelling story, how Glass and his staff find stories for the show, and the show’s journalistic goals.

Glass began his career as an intern at National Public Radio’s network headquarters in Washington, DC in 1978, when he was 19 years old. Over the years, he has worked on nearly every NPR network news program and held virtually every production job in NPR’s Washington headquarters. He has been a tape cutter, newscast writer, desk assistant, editor, and producer. He has filled in as host of Talk of the Nation and Weekend All Things Considered. In 2013, Glass received the Medal for Spoken Language from the American Academy of Arts & Letters.

The New York Times writes, “Mr. Glass is a journalist but also a storyteller who filters his interviews and impressions through a distinctive literary imagination, an eccentric intelligence, and a sympathetic heart.”

This American Life was founded by Glass and premiered on Chicago’s public radio station WBEZ in 1995. The show is now heard on more than 500 public radio stations each week. With a tone that ranges from light-hearted to sardonic to tragic, This American Life uses first-person narratives and editorial commentary to address everything from current events to human nature. Most weeks, the podcast of the program is the most popular podcast in America. The show also airs each week on the CBC in Canada and on the Australian Broadcasting Corporation’s radio network.

According to The Nation, “What’s amazing is how new [This American Life] sounds. It has this beat all to itself…These stories float right into your brain and lodge there.”