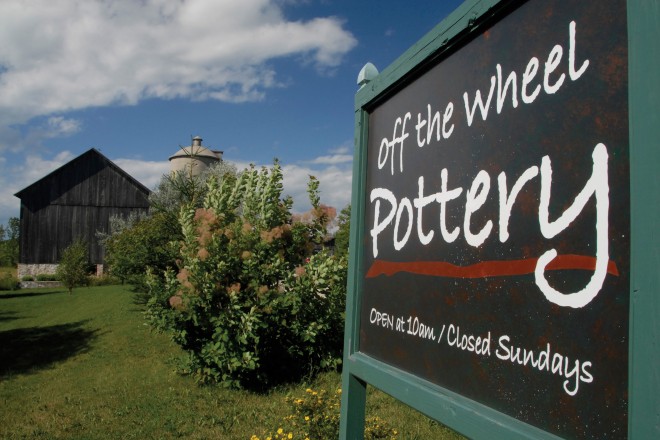 It’s a bright Sunday morning as Reneé Schwaller sits at her wheel working on throwing a couple of pots before switching gears to get ready for a family party later on that afternoon. As she works the clay her children, Ava (8) and Wyatt (4), wander in to see what’s going on. The studio space, added to the property three years ago, is full of light and shares the same relaxed and rustic feel as the rest of the gallery farm structures, namely the original granary and barn.

Reneé and her husband Steve purchased their property 13 years ago with a hunch that it would be the ideal gallery space. The first order of business was to get the house renovated. After that considerable project, they began converting the granary into Reneé’s workspace and gallery. When the studio was built, Reneé had much more room to showcase her own work as well as that of other talented potters. Most of the potters are from the Midwest, such as Laura Witt from West Jacksonport; however, there is an artist from Pennsylvania named Bill Campbell, who is a particular draw due to his unusual use of glazes.

This past year, Steve and Reneé renovated a portion of the barn to extend their pottery display areas as well as showcase local painters such as Shawn Peterson. Wide plank pine floors and a lack of electric lighting provide a simple and amiable backdrop for the artists’ work. Extra windows were added to let the light in from outside. Reneé’s father did much to help with the construction of the barn, just as he did for the previous building projects.

Schwaller’s career as a potter did not begin until after her college years. Always one who loved to sketch and draw, she considered studying art; however, Reneé wasn’t sure that she would be able to make a living with that kind of training. She instead chose communications as her major and graduated with a Bachelor of Arts from the University of Wisconsin-Milwaukee. After graduating, the Little Chute, Wisconsin native sought new experiences and adventure, traveling for several years throughout the country and also for a few months in Europe. She eventually found herself in Door County working at The Potter’s Wheel selling Abe Cohn’s work along with that of other potters. She was fascinated by watching Abe at his wheel.

“Clay intrigued me,” Reneé states. “I loved the fact that it was three dimensional after spending so much time working with two dimensional drawings.” She wasn’t working at The Potter’s Wheel long before deciding that creating works out of clay was exactly what she wanted to be doing. In 1994, Reneé began attending classes at the University of Minnesota-Minneapolis. Reneé selected classes that were stimulating to her, not following any particular structure. During this time she met her husband, who worked with her at the Hey City Stage and Theatre. After studying pottery in Minneapolis for a year, she spent a semester in Hawaii on a pottery exchange.

Reneé will tell you that her work has changed quite a bit from when she first opened her gallery. Her previous works were brightly colored and whimsical and do not resemble the style and colors that she is working with now. “I really don’t like to do the same thing over and over. I always need to be trying something different,” Reneé explains. Not ever wanting to be a production potter, Reneé prefers creating one-of-a-kind pieces. “If someone asked me to do a set of matching dishes, I don’t think I could do it. For one thing, none of them would be the same size. For another, I wouldn’t have the patience.” Reneé does have a lot of patience when it comes to her individual pieces, though. The style that she is known for, Sgraffito, is very time consuming. Sgraffito (or “scratched”) is a process in which the clay is carved, revealing the surface and beneath. Reneé creates bowls and mugs with this technique, which is a change from her previous ranges of Jar Ladies and Teapot Women.

One of her Jar Ladies is called “Mama and Her Babies” and is a representation of Reneé and her children. It’s Ava’s favorite piece and she’s hoping that it never walks out the door with an appreciative patron. Both of the children have shown an interest in the arts and draw quite a bit. They may also have the art gene from Steve since he, too, is very talented at sketching and dabbles a bit between working as an accountant and keeping the grounds of the gallery looking so inviting.

“I definitely could not do this alone. Between trying to create, run the gallery, and raise a family, Steve helps me keep everything together.” The gallery being closed one day a week helps ensure a balance. And when the gallery is closed from November through May, Reneé uses that time for her family and to produce the majority of her work.

As Reneé’s work evolves and keeps changing, so, too, does the gallery. Now in its 10th year, it has seen more people stopping by, three remodels, and a larger range of work represented. Given Schwaller’s propensity for variety, the only prediction for the future is that Reneé’s art will not be anything like what she has done. Maybe she will expand more of her clay and beaded jewelry or maybe she will start experimenting with different glazes. One can only guess where her creativity and curiosity will take her.

“I’ve been thinking a lot recently about the art of other cultures. And I can’t really narrow that down at this point since I’ve been thinking about a lot of them. This winter I plan on doing research and then experimenting with different symbols and designs,” Reneé says with an obvious enthusiasm. It is her goal to have a show every June which features something entirely new. Another exhibition that will feature some of Schwaller’s work will take place at the Fairfield Art Center in November (visit www.fairfieldcenter.org for details).

“Honestly,” Reneé admits, “I find it somewhat difficult to talk about what inspires me to do what I do. I prefer to just do it.” Not to worry, Reneé. The work speaks for itself.