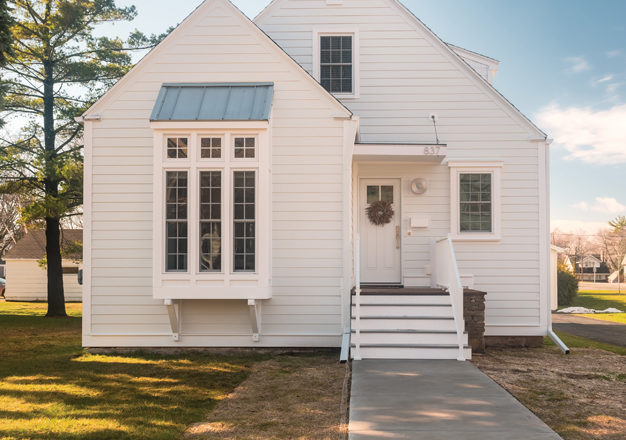 It’s fair to say that Jacinda Duffin has the heart of a nomad (albeit one with a limited home range), an eye for worthy projects, and the soul of a Girl Scout who leaves everything better than she found it. In the past five years, Duffin has made three major moves, all within the space of a few miles and each involving the substantial reenvisioning, refurbishing and revitalizing of a living space that was in some way compromised.

“I do move often,” Duffin admits, “but in my defense, every time I finish a project, people ask if they can buy it! I like taking a space that has undiscovered potential and turning it into something not only more habitable, but actually beautiful and appealing. It’s the ultimate recycling project.” 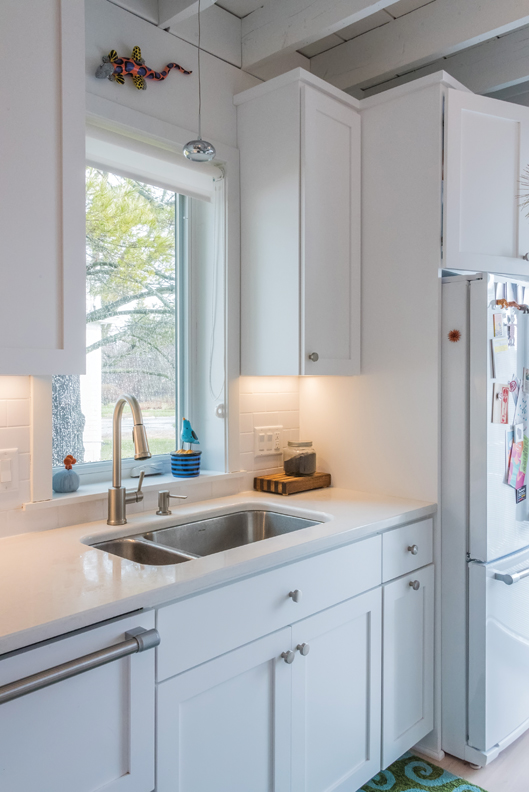 As one of the founding partners of True North Real Estate of Fish Creek, Duffin sees a lot of houses and has spent a lot of time thinking about what makes a home attractive.

“For me, it’s mostly about scale and light, how the space feels,” she said. “I’ve read that we as humans don’t necessarily want a lot of living space; what we want is the illusion of space. That’s definitely true for me. I like a small house with a lot of light.”

The house she recently remodeled sits on a quiet, tree-lined side street in a historic Sturgeon Bay neighborhood and has a footprint of 800 square feet; an upper level guest bedroom, bath and sitting area add 500 square feet. Features such as high ceilings, interior and exterior glass doors, clean lines, white walls and an inviting deck make the house feel more expansive than it actually is.

Duffin’s home was one of the featured stops in the 2015 DOOR CANcer Holiday Home Tour.

“Over and over, I heard people who live in larger houses expressing their surprise at its spaciousness,” she says. “One of the most common comments was, ‘I could see myself living here!’”

Previous to this project, Duffin converted a 600-square-foot hotel suite located in a downtown, turn-of-the-century, condominiumized home into a fully functional primary residence with living area, kitchen, bath and bedroom.

Duffin had three well-defined objectives for her current home.

“We live in an over-stimulating environment and life can get pretty crazy,” she said. “A priority for me was to have a peaceful space for daily life. I also wanted a dedicated, ready, welcoming area for guests that makes it easy for me to be a host, and single floor living space for resale purposes.” 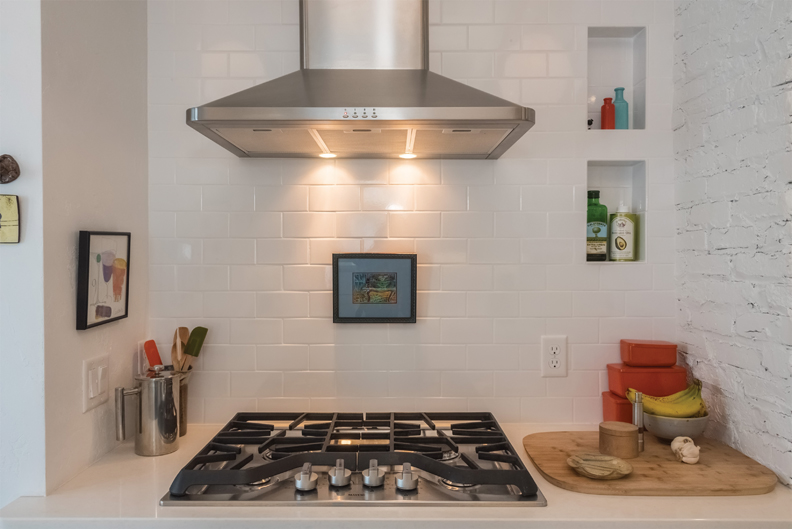 Refurbishing a house is different than building from scratch and requires a certain sensibility. According to Duffin, there are a number of keys to a successful remodel. First and foremost is having a good contractor you can relate to. Being familiar with his work and having sold houses he built, she hired Mark Struck of Struck Construction and Design.

“In addition to being a builder, he’s an artist,” she said. “That’s apparent. I trust his judgment and vision. And we both like the collaborative process, the openness to make decisions as we go along. It takes a little more time and you have to be willing to go back to the drawing board as the project proceeds, but that’s often where the magic happens.”

“It’s fun to get started and let the house reveal itself,” he said. “Not every client, either by their temperament or because of their situation, is open to midstream changes, but if you are, you can end up with something really unique and special.”

One of the midstream surprises Struck and Duffin encountered in Duffin’s home was the brick chimney in the kitchen. Struck explains, “We exposed the chimney with the thought of tearing it out since it’s no longer functional. Once we saw what shape it was in, Duffin decided to paint it white. It looks great. The chimney’s now a focal point in the middle of the house.”

Another “happy accident” was the late addition of a pergola on the back deck. Duffin says, “I added it after Mark had built the deck and ordered the railings. In order to get it to fit, we had to angle it. People comment on how intimate the angled entry makes the deck feel. It adds dimension that may look intentional, but actually it was in response to a miscalculation.”

Duffin laughs about the evolution projects take and recalls one of the first conversations she and Struck had in her new home.

“I was considering a fairly major rehab and asked Mark how he’d describe the house,” she said. “I wanted to know how to categorize it, where to begin my research for design options. He looked around and thought for a while and said, ‘Well, it’s kind of a…kind of a…really, it’s kind of a nothing house.’ I said, ‘Perfect!’ I like the freedom of a clean slate. Others might love built-in features or a distinct style, but I prefer something neutral, but not boring. I don’t want to feel bad about tearing out the things I don’t like.”

Duffin says people have an illusion that if they build a new house, it’ll be exactly what they want.

“It never is. There’s always something different you’d do the next time,” she says. “With remodeling, you embrace the idea from the beginning that you’re working with what you’ve got. You have to relish some amount of quirkiness.”

In her home, she points to the lack of a front hall closet and master suite. “We’re all defined by our limitations. By working with them, whether they’re money or space, you end up with a more creative product. It demands more out of you.” 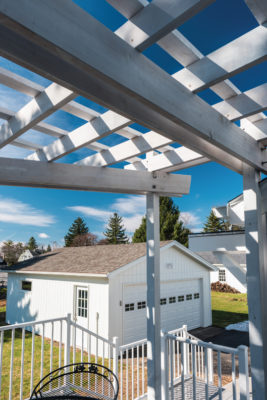 Duffin’s remodel was prompted by a leaky roof that needed repair in order to meet insurance qualifications. By the time the project was finished, most of the house had been gutted and the cost per square foot for remodeling was similar to what it would have been to build new.

“I’d have spent the same amount of money on a new house, but that wouldn’t have included high-end features like hardwood floors or the tile work I’ve incorporated or details like the oversized front box bay window that makes such a statement,” she said. “And I wouldn’t have the exposed beam ceilings in the kitchen that add so much texture.”

She also would not have had the charming location. All of these things add to the appeal of the house. “There’s a term we use in real estate called ‘general intangibles.’ They’re the things that can’t always be quantified but add value. They’re what make you respond positively to being in a space.”

With this project completed, one has to wonder what will catch Duffin’s attention next.

“Well, if I win the lottery, I’ve always thought it would be fun to revitalize a neighborhood, house by house,” she said.