In the heart of Fish Creek, a couple stops to admire the artful loops of water tossed into the air by two spinning copper sprinklers. The sprinklers wet the flowers in front of Paul David Fine Jewelry, and serve as yet another piece of art that visitors expect as part of their visit to Door County. 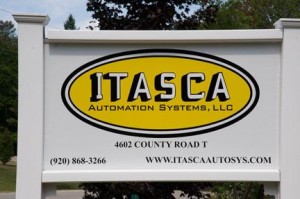 But if you break the sprinkler down into its parts and trace them back, you’ll eventually be taken to an industry far less recognized than the galleries and art scene of the peninsula, but no less intriguing.

Behind the gallery, soon-to-be UW-Oshkosh freshman Peter Gray pieces the sprinklers together on a long wooden table, an array of copper and brass parts strewn before him. One of those parts is a small brass bushing, a non-descript but integral part manufactured a few minutes away in a similarly non-descript, one story brick factory.

That $10 bushing uses the water entering the sprinkler to spin the head, creating a simple, but captivating fountain. It’s a tiny fraction of the business of Itasca Automation Systems, a manufacturer of coil-winding and automation equipment just off Highway 42 on County T in Egg Harbor.

Itasca doesn’t make the products the average person notices. The work its employees do is several steps further back on the supply chain from what ends up on the showroom floor. Scott Scharrig, Manager of Sales and Engineering, tries to explain it in simple terms.

“We make the machines, that make the parts, that go in dozens of things people use every day,” he said. 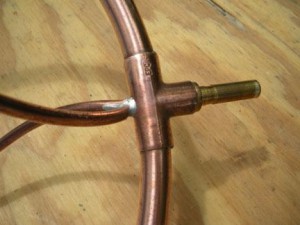 The small bushing made at Itasca Automation Systems that helps the sprinklers in front of Paul David Jewelry put on a water show for passersby in Fish Creek.

My brother Dan and I grew up down the road from Itasca, riding our bikes past it every day, but never knowing what went on inside. Then Dan interned there in high school, finally getting a look inside the business we had always wondered about. Now 32, my brother works as the company’s chief engineer. Despite hundreds of attempts, he’s never been able to make it clear to my liberal arts mind what exactly this engineering house makes, or why companies turn to this little business plopped in a rural neighborhood in tiny Egg Harbor for its products.

Last week I finally I spent some time inside its doors with him and Scharrig to try and put it in layman’s terms.

The bulk of Itasca’s business, they tell me, is making automated coil winding machines. The copper coils are not the parts anybody pays attention to, but they are found in dozens of products everyone uses every day. They’re integral parts of circuit boards in cell phones, computers, and cars. They’re in your washer and dryer, charged with electricity to create a magnetic field, which in turn exerts force on the pin that keeps a young child from opening the door when the machine is still spinning.

The coils are used in transformers on power lines, and they can even be found being used to cauterize arteries to save lives in the emergency room.

Why do they turn to Itasca?

Much of the company’s success, Scharrig says, is owed to the fact that the factory is so small and maneuverable. To some extent, globalization has helped Itasca solidify its hold on a niche where quality comes before price point. 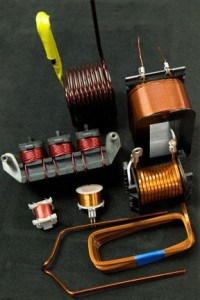 Itasca Automation Systems designs and builds automated coil winding machines that produce coils like these for companies such as General Electric and Ducate at its Egg Harbor factory.

In the late 1990s, as more companies moved manufacturing to China to take advantage of cheap labor, Itasca’s strategy had to change for the company to survive.

“We went from having people coming to us, finding us, to having to go out and pound doors and push sales,” he explains.

With each passing day, the economy Itasca competes in is more intertwined with economies in Mexico and Asia. Rather than try to battle to the lowest price point, Itasca tries to accentuate its greatest strength.

“What Itasca has evolved into is a company with intimate relationships with our customers,” says Sharrig. “Those relationships help us make custom products and come up with efficiency solutions to help companies keep their factories and jobs here in the Midwest.”

Itasca employs about 14 full-time employees, and Scharrig doubles as manager of engineering and manager of sales. Being small means Itasca’s workers see the entire picture and have their hands all over the product. The people who design and build their products are also the people who answer for it to the buyer.

“There’s no middle man between me and the customer,” Scharrig says. “We take a lot of pride in our work. It just shows there’s still a reason to get stuff made in the U.S.A.”

Dan takes it a step further.

“These machines cost companies hundreds of thousands of dollars when they go down,” my brother tells me. “So if they can buy one part from us instead of three unreliable parts cheaper somewhere else, it pays to buy from us.”

And when something does break down, Scharrig says Itasca’s size becomes an advantage.

“We do in-house machining and can turn a project around quickly to get a machine back up and running,” he says.

But companies like Itasca are usually found in industrial parks, clustered with other similar businesses or suppliers. Itasca almost seems a bit lost in its home a few steps from Chief Oshkosh museum.

The company was founded as the Bachi Company Research and Development Division in 1978 by Egg Harbor summer resident Bob Bachi in the 1970s. Bachi lived in a town called Itasca, IL, where he had his chief business at the time. But his inventive engineering mind was never far from work, and he wanted a place to flesh out new ideas when he was on vacation with his family. He started by working in his garage, but eventually built the factory now known as Itasca.

In 1990 he sold the Bachi Company, but retained the Egg Harbor division.

By 2003, Bachi protégé William “Bill” Weborg bought the company. It was the culmination of a long climb up the ladder for Weborg, who began working for Bachi right out of high school and made his way up from machinist, to designer, to sole owner. Weborg doubled as Assistant Chief of the Ephraim Fire Department, and tragically died at age 42 in September 2004 while responding to a fire call. In 2006 Charlie Brumder bought the company, keeping the fledgling manufacturer alive in Egg Harbor.

In an uncertain economy, when American manufacturing is moving oversees, Itasca is working to retrench itself in a small town in Egg Harbor. Scharrig said making it work long-term will depend on local education.

“The future of Itasca is going to depend on the relationship with our Door County high schools and industrial arts programs,” says Scharrig, who graduated from Sevastopol High School and went to Northeast Wisconsin Technical College in Green Bay. “It’s about us challenging the schools to provide the people for us. Since what we do is all custom-made and automation, it’s hard for us to find the workforce we need. As a result, we’re trying to work with the high schools and NWTC to develop the right curriculum.”

Searching for workers from afar isn’t a permanent solution he says.

“We want to employ the people who are from here, because those are the people that we can keep here.”

People who will help keep a proud little factory sending products all over the world from the unlikeliest of locations.