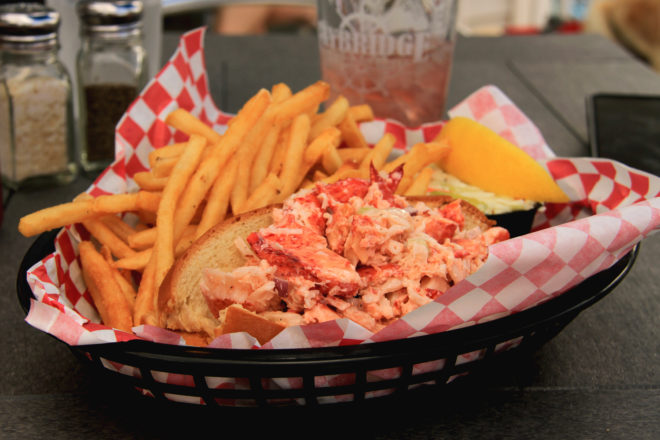 Although Door County is known for freshwater fishing and the resulting bounty of whitefish, that doesn’t mean you can’t also find some saltwater favorites on menus around the peninsula. One of these summertime staples – the lobster roll – is better known on the nation’s northeast coast, where lobster can be bought straight from the trap. According to Wikipedia, the classic lobster roll is a “sandwich native to New England and the Canadian Maritimes,” but it has now gained broader popularity around the U.S., especially during the summer.

Similar to our own iconic meal, the fish boil, there are many variations when serving a lobster roll, but they all follow a relatively simple recipe: fresh lobster meat on a grilled, hot-dog-style bun. The variations begin with the added ingredients: drawn butter or mayonnaise, lemon juice, salt and pepper, diced celery or scallion, and other herbs.

I’m a big seafood fan, and when the occasion calls for it, I’ll gladly sport a plastic bib and wield a shell cracker to navigate the exoskeletons of crab and lobster. However, until this past week, I had not indulged in an authentic lobster roll. This is mostly because the coastal regions to the east are foreign to me, but after seeing the lobster roll pop up on several menus around Door County, I decided it was time to get introduced.

Since opening in 2016, Boathouse on the Bay in Sister Bay has become a reliable location to seek casual American fare and seafood with a side of panoramic views – plus the restaurant has a “Famous Lobster Roll” highlighted on its menu. This item is market price, so, as is common when you choose fresh seafood, it will often be priced higher than a normal lunch item.

Views of the Sister Bay marina and Lake Michigan entertained me while I sat on the patio and waited for my cup of soup to start. The soup of the day was corn chowder with lobster, and it turned out to be rich, creamy and a little spicy. It was a tough decision between ordering that or the whitefish chowder – a daily staple – but I wasn’t disappointed.

My lobster roll arrived soon after, looking like the cover of a Maine magazine. It’s true that you eat with your eyes first, and I was visually sated. The roll came with a bit of coleslaw, a lemon wedge and the classic side of fries, but there’s an option to sub in several other items such as cheese curds or sweet-potato fries.

The roll itself was a buttery, thick, New England-style roll with flat sides – better for grilling. Sliced on top rather than the side, the bun was stuffed with a satisfying amount of fresh lobster coated in a mayonnaise mix that included minced red onion and celery. The roll was served cold, making for a refreshing, seasonal bite on an August day.

I could almost smell the sea as I savored my lunch, and I did, in fact, hear some seagulls and spot some sailboats. Eating a lobster roll lakeside in the sunshine was as close as I’ve come to eating a true New England lobster roll on the seashore, but I’m willing to bet it was nearly as good.