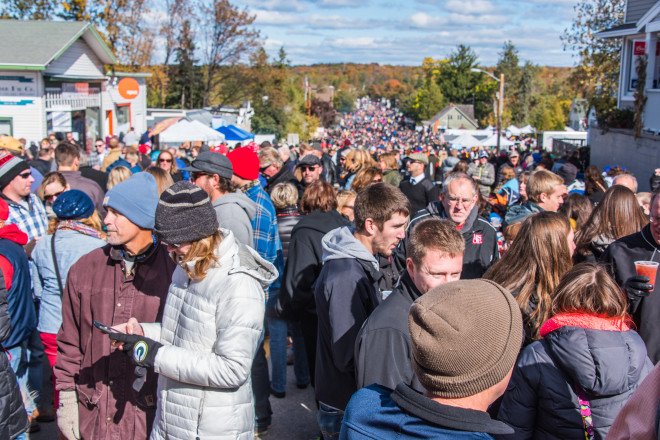 It’s the one weekend of the year when Door County utterly betrays the sedate, relaxed image it has worked so hard to cultivate. The season is over, and in the midst of our final weekend of kowtowing to the every need of our visitors in the hopes of making enough cash to get through the winter, or back to Florida, or anywhere over the bridge, we celebrate the tourist season’s last gasp with a party and everyone’s invited.

It’s Sister Bay Fall Festival, or just Fall Fest, if you prefer. Or more likely, Fall-down Fest, as it becomes for many of the tourism industry’s minions.

This is not to say that most of Northern Door’s service workers don’t drink plenty well enough before, during and after the season, it’s just that on Fall Fest, nobody feels guilty about it. That’s right, close the street, turn up the Happy Schnapps Combo and set up some garbage barrels cause we’re getting crazy. Look at me guys, I’ve got an open container of alcohol, OUTSIDE!

But it’s not just about those of us who slave away in kitchens, dining rooms and front desks, trying to squeeze in a year’s work in four or five months. It’s also a weekend of welcoming home friends and family, then re-acquainting them with your finest porcelain. 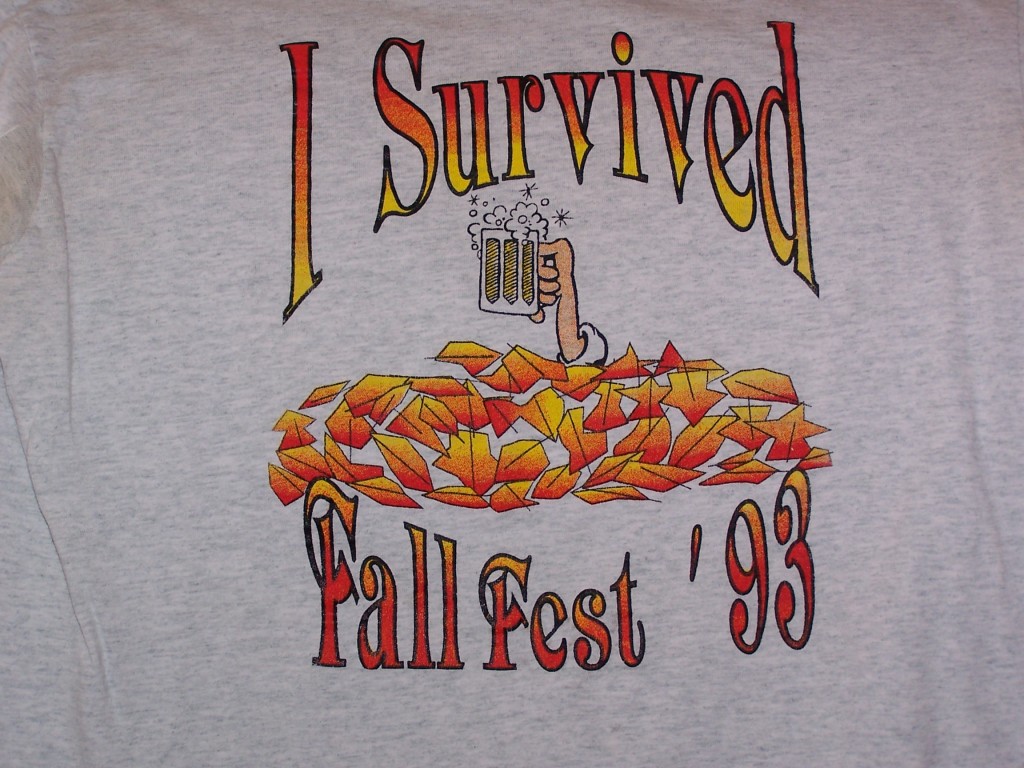 It’s the girls from Milwaukee, the Red Hat club, the bag-pipers, and Arty “the One-Man Party.” It’s loon fart shots and live music and drinking outside in the cold streets of Sister Bay only because, for two days at least, you can.

All of these forces create some uniquely Wisconsin phenomena, such as this recent exchange with a frequent patron at the Sister Bay Bowl who had never experienced Fall Fest. I was describing my previous experience working at Husby’s, the epicenter of Fall Fest weekend, and I’ll pick it up in mid-sentence:

I did mean “in the morning,” but since I was talking about Fall Fest, I didn’t realize I needed to specify. You live up here a few years and experience a few Fall Fests, and your perspective on things changes a bit.

In my admittedly limited travels, I’ve gotten the impression that “I don’t know why I’m so hung-over, I only had eight or nine drinks last night,” is not such a common lament outside the walls of Wisconsin. But on Fall Fest weekend, a similar morning-after analysis of one’s habits may resemble the following salutation:

“Hey Mike, how you feelin’ today?”

“Not bad, actually. I drank all day yesterday, but I only drank beer.” 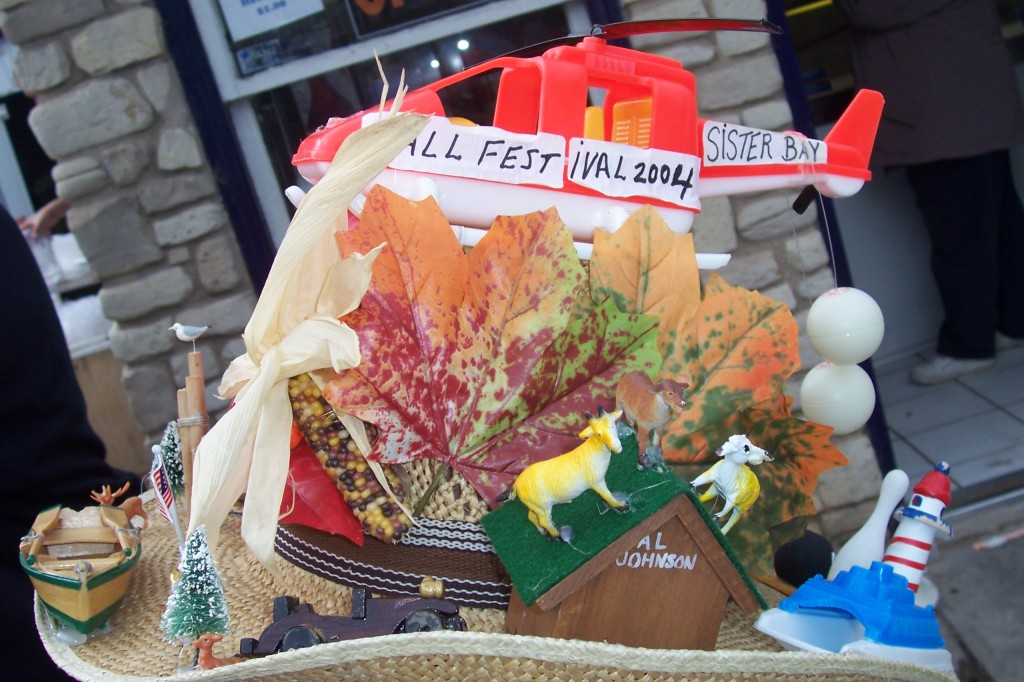 The hats of Fall Fest get rather creative.

Now, if the reader is from Maine, or New York, or generally from anywhere outside the fertile cheeseland, this simple exchange will likely read as sarcasm, an un-attributed Homer Simpson quote, or the shocking admission of an unrepentant alcoholic. However, if the reader is from Wisconsin (and Door County in particular), it likely doesn’t register as the slightest bit out of place. It’s as if somebody asked “What’s up?” and another responded “Not much.”

It is over this weekend that many of us test our bodies and organs in ways unimaginable to most people this side of Mardi Gras. We strive to answer the question the great minds of science have long-pondered, “How long can the human body sustain itself on little more than beer, bloody marys, brats, chili, and gravy burgers?”

Well, maybe science hasn’t long-pondered this, but it probably should. My guess…er, experience, says it takes about four days before system failure begins to set in, but I’m a small guy, actual results may vary.

This may sound like an ode to drinking or decadence, and while it is in part, that would be a narrow interpretation of our beloved celebration. Fall Fest is not just a bunch of frat boys or rednecks getting drunk and causing trouble. In fact, it’s a remarkably trouble-free gathering, given the level of inebriation present. Throw in the complex mixing of locals with out-of-towners in close proximity, not to mention Packers and Bears fans, and Fall Fest could almost be considered a sociological anomaly worthy of in-depth study. (Note to village officials: consider seeking grants for this.) What it is at heart is moms and dads, grandmas and grandpas, aunts and uncles, all letting loose together, listening to music, watching football and bonding over beer and bratwurst. 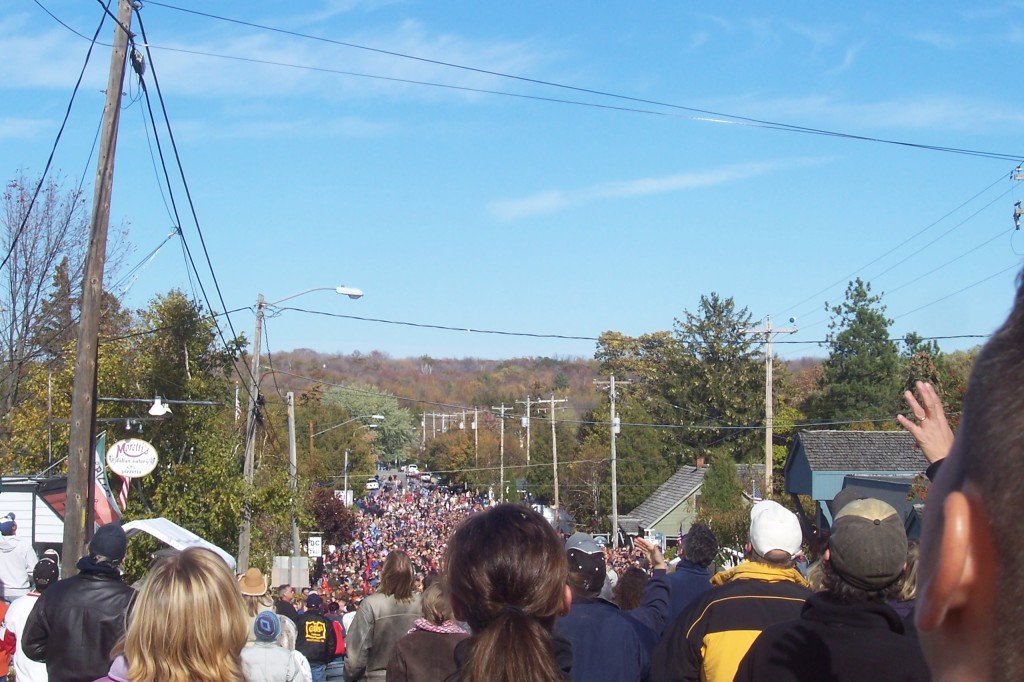 Revelers await the ping pong ball drop, in which grown men and women grovel for ping pong balls in the street. Photo by Len Villano.

In another culture and another time, Fall Fest would be celebrated around a bonfire, or at the fishing hole or someplace else commemorating the village lifeblood. As it is, our lifeblood is tourism, and for a couple of days, we get to be tourists in our own town.

Some years we delude ourselves into thinking we’ll take it easy, maybe even stay home, but then we find ourselves sitting at JJ’s on Sunday night, licking cinnamon sugar off an orange slice as we listen to some music or pocachello, and take attendance of who has survived Fall-down Fest once again.

Then Monday comes, and the morning’s mass exodus combines with the power of a thousand hang-overs to produce the most desolate day of the year in Sister Bay, and the long winter begins to set in.