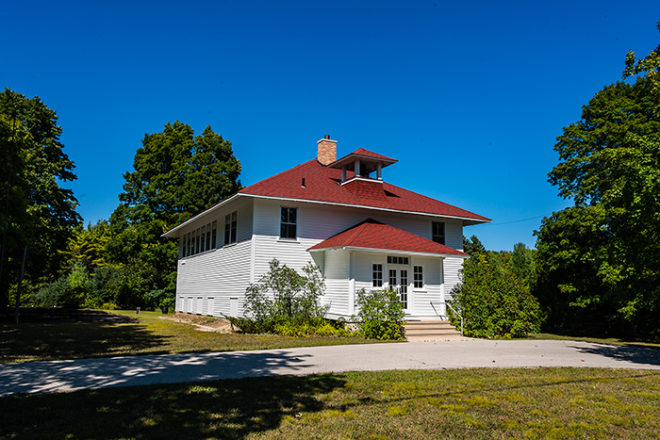 The school after John and Jackie Sawyer restored it in 2004. Photo by Len Villano.

Painter Karen Cook drove past the old schoolhouse every day, always wondering what was inside. It had recently been repainted and fixed up, and Cook feared it was ruined inside — split into rooms for a vacation home, the remnants of the old one-room Appleport School covered up with drywall and carpet. Then one day she approached the building from a different direction.

“I was coming down Old Stage Road, and off to my left I see these big, beautiful windows,” Cook recalled. “I almost drove off the road.”

The windows covered nearly the entire north-facing wall of the building, and if there was still one big room inside, it would be a dream of a painter’s studio. North light is different from light coming from any other direction because it doesn’t change as the day progresses.

“East light is only there for a little while,” Cook explained. “That’s true of the east, south and west, but the north light is constant. So the north light shows the same shadow no matter how long you’re looking at someone for a portrait or a still life. The shadows don’t move. It usually gives a cooler light; therefore, your paintings tend to warm up a little bit. As a painter, you tend to make the colors a little warmer.”

But what was left inside, Cook wasn’t sure.

Designed by T.D. Crandell, Appleport School opened on the corner of County Road ZZ and Old Stage Road in 1914, hosting first through eighth grades in a single room without electricity, necessitating north-facing windows for light. Electricity wouldn’t come until 1930 — three years before renowned landscape architect Jens Jensen lent his talents to landscaping the property and playground.

“We had five to six kids per class,” Sawyer said. “We were kind of unique because we were a one-room school, while a lot of them, like Wildwood and Egg Harbor, were two-room.”

It would seem that a one-room school would foster chaos, but John Sawyer, who attended elementary school at the old Egg Harbor school, said it didn’t.

“You sat in rows by grade,” he recalled. “Each subject was split into 15 minutes per grade. First-graders would start up front with the teacher, and when they sat down, the second-graders went up, and the third-graders would help the first-graders. You didn’t act up because if you did, your older sibling would probably tell on you when you got home.”

Jackie Sawyer was part of the final class at Appleport School. The Gibraltar School District began consolidating its old rural schoolhouses, and Appleport closed in 1966. Twenty-two years later, the kindergarten in Ephraim was the last of the district schools to close, consolidating all the district’s students and teachers at one campus in Fish Creek.

In 1997, the Sawyers bought Carlson-Erickson Builders, whose offices were located within shouting distance of Jackie’s old school. Its paint was peeling, playground equipment rusted and school bell long gone, but John had visions of buying the school and turning it into offices for the company. By the time its owner died in a car accident in 2002, Carlson-Erickson no longer needed a new office, but John and Jackie still wanted to save the old school.

They bought it and were stunned to find that it was still much as it was on Jackie’s final day there in 1966: The books were still in the basement, along with desks and parts of the old playground equipment; pictures of Abe Lincoln and maps were still on the wall; and even the circle for playing duck, duck, goose remained on the floor.

As the Sawyers pieced the building back together, Bob Dahlstrom, a former Gibraltar school superintendent who lived up the road, came forward with the old school bell. By 2004, the school was ready to host a reunion organized by former student Charlene Rice, who welcomed scores of former students to the room where they learned to read, write and master multiplication tables.

Those north windows that nearly sent Cook off the road were, ultimately, what breathed new life into the Appleport School. Cook had been searching for a place where she and a friend could paint, and she knew she had just found it. Cook soon arranged to lease it from the Sawyers and bought the building three years later.

Today, the duck, duck, goose circle remains on the floor. The chalkboards stretch wall to wall. The swings on the playground sway in the breeze, and if you listen closely, you can almost hear the echoes of balls bouncing on the remnants of the old basketball court.

“The Town of Liberty Grove deserved to have the Appleport School remain as it was,” Cook said. “We made it our business to keep it the way it should be kept.”

Inside Cook paints in the old classroom, bathed in that beautiful north light. A picture of her mother — who nagged her to paint for years before signing her up for a class at Peninsula School of Art when Cook was 57 — is taped to the wall. Cook took that class, got hooked and turned herself into a painter who would show her work at Edgewood Orchard Galleries and elsewhere.

Cook said former students occasionally knock on the door and want to step inside.

“They’re so thrilled to find the old schoolhouse is intact, and the schoolroom the way it always was,” she said, recalling the elderly gentleman who exclaimed, “Ohhh, the library is still here!”

“It’s a very peaceful, inspirational place,” Cook said. “A lot of learning has taken place here. And it’s kind of in the walls. I feel really lucky.”