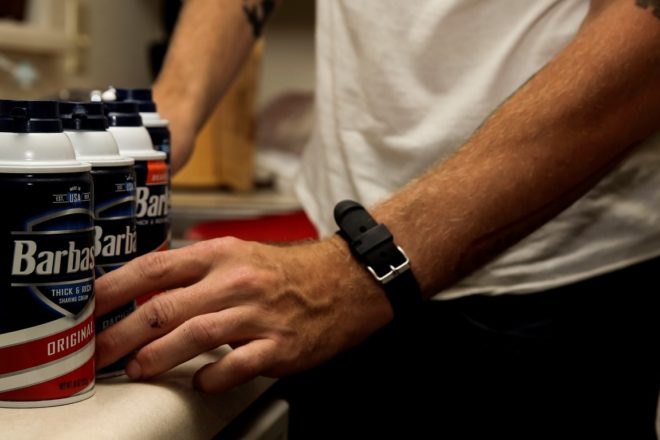 As a rule, I hate to shave and I believe that most males share a similar sentiment. As young men we eagerly await the first signs of whiskers, to either grow some facial hair or to start shaving. Once the whiskers begin, however, and the reality that we will be shaving or dealing with facial hair for the remainder of our lives sets in, anxiousness is replaced by annoyance.

In some ways, I am more fortunate than other men: my whiskers don’t grow quickly and most of my life my whiskers were either a dirty blonde color or slightly red, which my ashen pallor tends to mask. This has allowed me to reduce shaving to an every-other-day requirement rather than a daily chore. Still, even at an every-other-day rate, I find the process tedious and, when totaled over the course of a year, rather costly.

There is only one aspect of shaving that I consider a positive: because it is a rather mindless process I can do a lot of thinking while I drag a razor across my face. And, for the past few months I have been thinking a lot about planned obsolescence while I shave.

After starting with shaving cream and razor I quickly transitioned to an electric razor, which was my preferred method of shaving until about a year ago when I returned to a razor and shaving cream. You may think that an electric razor is the cheaper method, but you would be wrong, and this was the starting point for my consideration of planned obsolescence.

For those who don’t know, planned obsolescence (according to the magazine The Economist) is “a business strategy in which the obsolescence (the process of becoming obsolete – that is, unfashionable or no longer usable) of a product is planned and built into it from its conception. This is done so that in future the consumer feels a need to purchase new products and services that the manufacturer brings out as replacements for the old ones.”

The history of planned obsolescence stretches back to the early part of the 20th century and, while the meaning and application of the term has occasionally broadened or altered slightly in its application, the practice is with us today, arguably stronger than ever before.

By way of example, consider the desktop printer you likely have sitting in your home office or den. These remarkable devices allow you to create all manner of documents, create cards or other graphic creations, and print photos without ever leaving your house. And I suspect that when you purchased your printer you were delighted with the great price you paid. Ten years ago, the printer you now own – with all its remarkable features, would have cost you several hundred dollars. Today, you can buy a printer/scanner/copier combination that will serve most purposes for less than $100.

Yes, we all received a great deal on the purchase of our printers – until we go to replace the ink cartridges and discover that a replacement black ink cartridge and a color ink cartridge costs half the purchase price of the actual printer! And then there’s the paper costs. This is an alternate form of planned obsolescence that has invaded our marketplace – a corollary of sorts.

Which brings me back to electric razors. Like printers, electric razors can be purchased at ridiculously low prices, particularly during the holiday season and times like Fathers’ Day (which is almost upon us). The last two electric razors I owned cost less than $40, were well-respected name brands, and actually functioned quite well. But after a while the blades need to be replaced and in each case, when I went to purchase replacement blades, the cheapest prices I could find were between $30 and $35 – 75 percent or more of my original purchase price! So now you are faced with the dilemma of paying for replacement blades or just buying a new razor and this, folks, is an example of the aforementioned corollary to planned obsolescence.

So I went back to shaving cream and a razor, which I have been doing now for more than a year. But in the past several months I realized that I hadn’t escaped the planned obsolescence corollary: I was, in fact, still trapped.

Here’s what I realized: my shaving routine requires that I dampen my face and then dispense a quantity of shaving cream into one palm, which I then spread across the lower portion of my face and neck with my other hand. My preferred shaving cream is Barbasol, a tried and true product that has been around for years. I have experimented with other products, including the gels that supposedly foam up, but I found all to be disappointing.

This sounds simple, right? Well it’s not, folks. And here’s the problem: no matter how I try, no matter how carefully I calculate, I always end up with more shaving cream in my palm than I need to satisfactorily cover my face and neck. This may sound ridiculous to my female readers, but ask a male in your life and I am certain that they will confirm the reality of this problem.

There are several reasons I can provide for this dilemma: the amount of pressure applied to the dispenser can dictate the speed at which the cream is dispensed; the cream, itself, tends to expand in the palm after it is dispensed, etc. Regardless of the reasons, however, the fact remains that I have not successfully dispensed the correct amount of shaving cream to cover my face since I returned to manual shaving.

Indeed, my conservative, unverified estimate is that at least 10 shaves worth of shaving cream from each can of Barbasol I use ends up being washed off my palm down the drain. Thus, another example of the planned obsolescence corollary I have been talking about throughout this column.

And this leads me to my final observation on the subject: this morning before sitting down to write this column (after I washed the requisite excess Barbasol down the drain), as I used my left hand to stretch a portion of the skin on my neck taut for a razor swipe and considered how often these days I need to manually tighten my skin in order to effectively shave, I looked at my aging reflection and realized I am quickly becoming yet another planned obsolescence corollary.