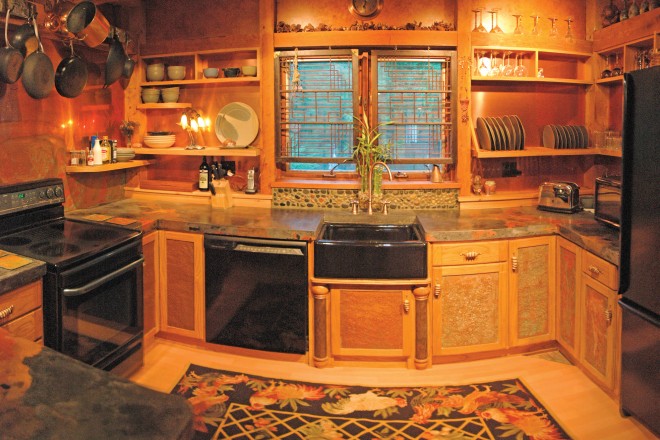 Craftsmen and homeowner work together to create a unique living environment. Photo by Dan Eggert.

What is a real Door County style home? It becomes more difficult to define every day, as one homeowner will tell you it’ s their small cottage or while another might point to a farmhouse on a winding county trunk road. An ad in a magazine might tell you it’s a log home or a water-view estate, and if you didn’t know much about the history of the peninsula, you might very well be sold on the idea that a condo is the epitome of Door County living.

Of all these claims, none could be a more authentic reflection of the artistic talents, craftsmanship and personalities of Door County than the home of Nan Helscher in Fish Creek.

After two years of house-hunting in 1999, Nan found herself captivated by a rather non-descript yet charming little house on Gibraltar Road, then ran into a bit of luck when another buyer’s bid fell through, enabling her to snatch the home off the market.

“I immediately saw the potential for this place,” Nan says, still excited by the memory of her find. “It was raw but it was so warm.”

The very plain exterior of the 31 year-old house masked a hidden skeleton of rare construction. The home, it turns out, is one of the few examples of timber-frame construction in the county.

Timber-frame, or post and beam, construction is a unique method of homebuilding that brings many benefits to the homeowner that a traditional structure would not. The materials in a timber-frame home are almost all natural, and in the case of Nan’s home, all of the timbers used in the construction were found on the Door Peninsula, many of which were going to be cut down anyway.

Unlike steel or concrete construction, timber-frame homes do not release hazardous bi-products into the air when created. The homes are made mostly of wood, a renewable resource that results in a much more energy-efficient home than other styles. When all is said and done, the homeowner has a beautiful residence in which the support beams are usually left exposed to the interior, giving it a rustic, woodsy quality.

I sit at the dining table as Nan calls to her two large dogs from the other end of the house. The dogs, Bear and Scout, stand before me, unmoved by her commands. She calls again, but they don’t come, instead, they slowly and deliberately sit down, staring happily at Nan as she tilts her head to the side looking back at them, the way so many of us dog owners do in a feeble attempt to communicate with our pets. We tilt our heads and try different expressions, as if it’s not a language barrier we face, but some sort of problem translating gestures.

“It’s like this every day,” her son Mark says, shaking his head. “This takes up at least an hour every day.”

The big dogs are one of the reasons Nan has decided to expand her nest. Another is Mark and his friends. The last piece of inspiration was a painting by Margaret Lockwood, The Logging Trail. Helscher bought the painting, only to bring it home and find that she had no wall to fit it on, and thus was inspired to begin the ambitious expansion and remodeling project I sit in the midst of now. The painting is of the long thin trunks of a foggy forest at dawn, and at first glance it looks like it might be just a large, warn copper sheet on the wall. Much of her new home would grow out of this painting.

Nan knew she wanted to do the addition in the same timber-frame style as the original home, and she knew just whom she wanted to do it. She got in touch with Bob Polomis, who has been building timber-frame homes in Door County for twelve years. Bob recommended that she hire Terry Lindenberg, of Appleport Builders of Sister Bay, as the general contractor.

“I knew I wanted Bob to do the timber work,” Nan said, “and he said he’d prefer to work with Terry on it, so I talked to Terry, and I am so happy I did. Those two have been great to work with.”

While Nan struggles to get through to her dogs, she’s found it much easier to translate her complicated vision for her home to Bob and Terry, who said his main challenge when remodeling a house is “to make it look like it wasn’t a remodeling job.” But this would not be a typical renovation. An artist herself, Nan didn’t turn to the usual suspects to complete the many small projects throughout the home. Instead, she brought in a succession of local “starving artists” and craftsman to take on varying aspects of the renovation.

“My favorite thing about all of this has been giving work and opportunity to all these incredibly talented people,” Nan said. “There are so many talented people up here, and you just wish more people would use them and take advantage of them.”

In a tour of the property, she bounces from one room to another, still excited by each piece of the uncommon puzzle she calls home. It is clear that she has tried to make something singularly Door County where she could have had the routine. Not only does each room have a story behind it, but each little touch is a tale of its own.

The home is full of quirks and unique touches, any one of which would set a room or a home apart but work here together to paint a single picture–a conglomeration of all that the people and environment of Door County represent.

The tile of the bathroom floor meets the hardwood of the dining room via a 4- inch stretch of cement pebbled with smooth stones from a favorite Door County beach. The two small steps that escort you into the addition to the home are made from slabs of unpeeled trees that have been stained and polyurethaned. Both the hearth and mantle in the new room are done in the same style, adding a perfect accent to the timbers that slide down from above.

In her remodeled kitchen, the walls behind the countertops are faced in copper, which local craftsman Kevin Combs carried into the cabinets below. The cabinets each have a copper face framed in wood and copper spiraled handles. The copper eventually found its way into all aspects of the home, including the banister that Nan completed with leftover pieces of copper piping from Anschutz Plumbing. For the banister’s centerpiece, she chose a rustic old piece of a sailboat in a nod to the county’s sailing heritage.

Underneath the stairs another craftsman, Jim Janus, created a storage cabinet with touches to match Combs work in the kitchen and the unique banister above.

It’s clear that all of this could not have been done if not for the unique relationship between builder and homeowner on this project. Terry’s and Bob’s appreciation for Nan’s creative whims and her respect for their honesty and experience have been essential for the realization of her vision.

Bob and Terry seemed more than happy to take on a project that’s a little break from the norm. “Well, we could really care less if we ever build another box,” Terry said. “Sure, you have to do that to pay the bills, but it’s nice to take on something a little different. The whole thing is built by Door County artists and craftsmen with Door County materials.”

“She was really a fun person to work for,” Polomis said. “She’s a really creative person and she gave us a lot of input.”

In many cases that extra input can be a problem for the builders, Lindenberg said, but not this one. “She had a lot of good ideas, and she put a lot of elbow grease into it herself,” he said. “You really appreciate the leeway she gives you, especially when you see that the owner appreciates your craftsmanship.”

Five years and a lot of little touches later, the potential Nan saw on first glance is nearly realized.