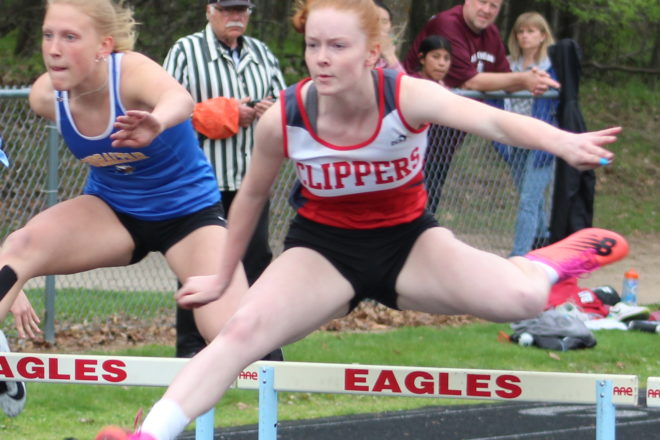 Two girls from Door County have qualified for the WIAA state track and field meet June 3-4 at UW-La Crosse.

At the Division 2 sectional held May 26 in Little Chute, Sturgeon Bay junior Cate Anderson punched her ticket to state by placing second in the 100-meter hurdles. Her time of 16.17 seconds was .35 seconds off the winning pace of Green Bay Notre Dame junior Hope Barington.

With the top-four places in each event automatically qualifying for the state meet, Anderson also came within .69 seconds of advancing to La Crosse in two events with her fifth-place finish in the 300 hurdles (49.47).

In the Division 3 sectional held May 26 in Rosholt, Sevastopol sophomore Kylee Duessler made the state field by placing third in the 200 dash (27.08). Her time was .8 seconds off the winning pace of Edgar junior Morgan Schnelle.

Team points were awarded for the top-eight finishes in all 18 events, ranging from 10 points for finishing first to a point for coming in eighth, so some local athletes who did not qualify for state contributed to how their teams finished in the sectional standings.

In Division 2, Sturgeon Bay’s girls tallied 14 points for 17th place. Anderson accounted for 12 of those points, with the two others coming from freshman Ella Tarkowski placing seventh in the 400 dash (1:04.23).

In the boys competition, neither the Clippers nor the Eagles had any top-eight finishes to score points.

In Division 3, Sevastopol’s girls tallied 13 points for 18th place after they scored points in all three sectional events in which they qualified. In addition to Duessler’s state-qualifying sprint, sophomore Bea Dramm came in fifth in the 3,200 run (12:32.38) and added a sixth-place finish in the 1,600 run (5:30.3).

Gibraltar’s girls, who placed 29th with 6.75 points, qualified for the sectional in nine events but scored points in only four of them.

Sophomore Nida Zukauskaite came within 1.11 seconds of qualifying for state after placing fifth in the 300 hurdles (51.0). She also tied for seventh in the high jump (4 feet, 10 inches).