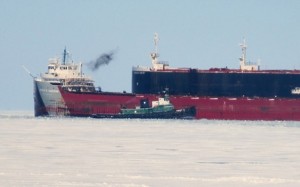 The recent troubled voyage of the storied iron ore carrier Arthur M. Anderson underlines an issue the Lake Carriers’ Association brought to light in January when it called on Congress to build a companion to the U.S. Coast Guard’s only heavy-duty icebreaker Mackinaw.

The Anderson’s troubles began on Feb. 19, when, three miles off shore of its destination to pick up ore at Conneaut, Ohio, and bring it to Gary, Ind., it got stuck in heavy ice. The 140-foot icebreaking tug Bristol Bay, based in Detroit, was in its own battle with the thick ice on Lake Erie, so was unable to free the Anderson.

That’s when 234-foot Canadian Coast Guard icebreaker Griffon was dispatched to help the Bristol Bay and Arthur M. Anderson get free of ice, which eventually happened.

With the assistance of icebreakers, the Anderson continued its journey, without cargo, 600 miles to Sturgeon Bay for a short winter layover.

The Arthur M. Anderson has been a member of the U.S. Steel fleet since it was built in 1952. It was named after Arthur Marvin Anderson, a U.S. Steel director at the time. It started out life as a 647-footer, but a 120-foot midsection was added in 1970. It was converted to a self-loader in 1981.

But it is best known as the last vessel to have contact with the ill-fated Edmund Fitzgerald during a terrible storm on Lake Superior on Nov. 10, 1975. Both vessels were carrying taconite pellets to Gary, Ind., and had left within hours of each other, the Fitzgerald from Superior, Wis., and the Anderson a little farther north at Two Harbors, Minn. They were on the same course that fateful night, following the Canadian lee side in an attempt to avoid the worst of the storm, and between 10 to 20 miles apart. The ships were battling sustained winds of 45 knots that gusted 70 to 75 knots, according to the master of the Anderson, and producing seas 18 to 25 feet.

The last message the Anderson received from the Fitzgerald before it sank with all 29 men aboard was, “We’re holding our own.”

Forty years later, the Arthur M. Anderson is still chugging, and as with this year, is often the last one off the lake.

Right now it’s sitting at Bay Shipbuilding in Sturgeon Bay, where it will undergo a winter overhaul for another season of plying the Great Lakes.

In its Jan. 6 news release, the Lake Carriers’ Association, which represents the various owners of the Great Lakes fleet, said the brutal winter of 2013-14 cost the economy more than $700 million and nearly 4,000 jobs.

“It is clear that the ice conditions that prevailed last winter call for a reassessment of both nations’ icebreaking fleets,” James H.I. Weakley, president of the trade association representing U.S.-flag vessel operators on the Great Lakes, said in the release. “At a minimum, Congress must authorize construction of a twin to the Mackinaw so we can have two high-powered American icebreakers on the Lakes.”

The Mackinaw, headquartered in Cheboygan, Mich., is the Coast Guard’s only heavy-duty icebreaker on the Great Lakes.

Weakley went on to explain that industries around the Great Lakes basin are geared for near-year-round shipments.

“Demand for U.S.-flag cargos during periods of ice cover can approach 20 million tons,” Weakley said. “Make no mistake about it, some economic activity was lost forever because of the difficulties in keeping the shipping lanes open. Steel that had been ordered was not made, which means either some products were not produced or made with foreign steel. Worse yet, some North American products were outright replaced with imports. We estimate the lost business revenue topped $700 million.”