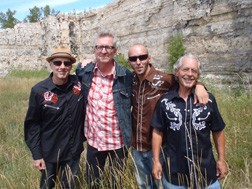 Ernest Tubb is generally credited with recording the first honky-tonk song when he released “Walking the Floor Over You” on May 28, 1941. A decade later, honky tonk came into its own with the likes of Hank Williams, Lefty Frizzell, Webb Pierce, Faron Young and a few others, only to be eclipsed in the 1960s by the smooth country pop sound that came to be known as Countrypolitan.

But not everyone was willing to let the honky-tonk sound fade into obscurity. For example, the Fox Valley-based Andy’s Automatics has been making honky-tonk music for the 21st century for the past decade.

Along with weathering the normal trials and tribulations of keeping a band together, Andy’s Automatics has survived the sudden death of its first manager, Matthew Golay, a personnel change and singer/songwriter Andy Lubahn’s own discouragement with the business.

“It got to the point with the band it wasn’t that much fun,” Lubahn said recently. “It got to the point where I hoped the Cimarron (a Fox Valley club where his band often plays) would have a grill fire on Friday night so we wouldn’t have to play Saturday. It turned into that, and that sucked. I’m not blaming anybody, but there was some bad energy.”

About a year ago the band made a personnel change, bringing Dick Lohrenz of the band Honky Tonk Twisters in to play bass.

“In the frame of things, we’re extremely happy right now,” Lubahn said. “The band is good, I think, and we’re playing well. And I’m writing again, which I haven’t done for five years. It’s been inspirational with the new line up and good energy. We’re as good as we’ve ever been, I think.

You can see what he means by the good new energy when Andy’s Automatics return for an afternoon show at one of their favorite venues on July 7 at Stone Harbor Resort in Sturgeon Bay.

“We give favor to Nancy [Bertz, general manager at Stone Harbor] and Stone Harbor. She cultivated us up there,” Lubahn said. “Honky-tonk music isn’t the first thing on people’s mind in that area. She took chances on us. It took us time to get a crowd. Once we did, it came fast and hard. Some of my best nights out have been at Stone Harbor.”

“I have been friends with Andy for close to 18 years. I am originally from Oshkosh, so that is where we first met,” Bertz said. “After we moved up here and I met pat mAcdonald, he was interested in musicians who performed and wrote their own music. I introduced him to Andy. Now Andy and pat are great friends! It is so heartwarming to see the man that Andy has grown to be!”

Lubahn confirms that he and mAcdonald have become close since 2006 when he was first invited to be a member of the Construction Crew – the group of musicians invited to team up with other songwriters at the Holiday Music Motel to create music before all the bands perform at different venues during Steel Bridge Songfest.

“Sturgeon Bay has always been like our home away from home,” Lubahn said. “People treat us so phenomenally. It’s just a blast to play up there.”

For more information about the band visit their Facebook page.