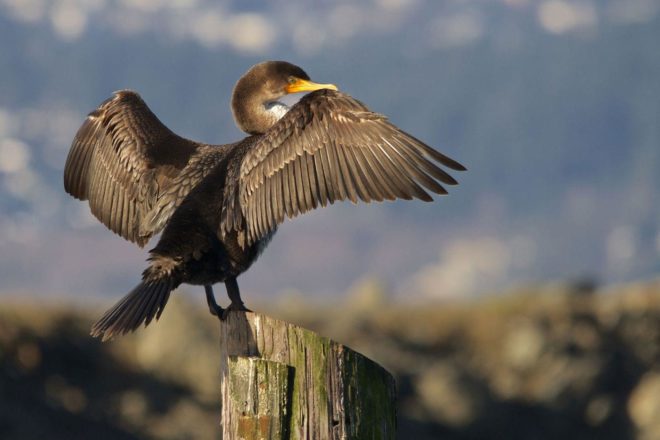 It’s been four years since a U.S. District Court judge in Washington, D.C., shot down a successful program that allowed Great Lakes states to reduce booming numbers of double-crested cormorants. U.S. population estimates are in the millions, including about 250,000 in the Great Lakes.

Whether swallowing newly stocked salmon and trout in Lake Michigan, spawning perch in Little Sturgeon and Sawyer Harbor, or even exotic invaders such as alewives and round gobies – important prey species for salmon, trout, walleyes and other game fish – many anglers believe the birds are a scourge to Great Lakes fishing.

Much like wolves, double-crested cormorants have no natural predators, and they damage both public resources (wildlife and fisheries) and private resources (ponds and aquaculture sites).

In addition to feasting on more than a pound of prey fish and game fish species each day, individual cormorants can slash whitefish in commercial nets and make wastelands out of the smaller islands where they nest, stripping trees of vegetation and killing trees and undergrowth outright with their acidic guano.

There’s been a lot of foot dragging since the May 2016 decision to end depredation practices such as culling adult birds and oiling cormorant eggs so they don’t hatch, but the U.S. Fish and Wildlife Service is finally proposing to allow lethal control at fish farms and hatcheries and give states the authority to reduce populations when, where and why they see fit.

The U.S. Fish and Wildlife Service is in an initial phase of public input called scoping, and additional public-comment periods will follow. More than 330 citizens have already provided comments, and now’s a good time to add your voice to the mix. You can read the comments of others, submit your own and learn about the agency’s proposal on the federalregister.gov site. Search for “migratory bird permits,” then look for “double-crested cormorants.” Comments will be accepted through March 9.

The Quality Deer Management Association (QDMA) says the national percentage of yearling bucks (age 1.5) taken by hunters fell to 30 percent during the 2018-19 season – the lowest ever recorded.

Kip Adams, QDMA’s director of conservation, said about one-third of the bucks taken by hunters are now 3.5 years old or older – by far the highest ever.

Meanwhile, the national antlerless deer harvest was lower than the buck kill for the second year in a row: an estimated 2,881,168. Modern antlerless harvests first surpassed the buck harvest in 1999 and remained higher for 17 consecutive seasons, until 2017.

“Reduced antlerless harvests are necessary in areas where deer herds have been balanced with the habitat and when other mortality factors, such as predation or disease, are increasing,” Adams said. “However, few states should be harvesting more antlered bucks than antlerless deer on a regular basis.”

Lake Winnebago sturgeon spearers are into the final weekend of a 16-day season.

Through the first 10 days, 283 sturgeon were taken from Winnebago and 266 from the upriver lakes. The total of 549 puts the 2020 season on pace to hit perhaps 800 fish or so, which would be similar to the past four harvests. During years with clearer water, it’s not unusual to see 1,000 to 2,000 or more fish speared.

There were 22 sturgeon larger than 100 pounds taken through Feb. 17, including a pair in the 140-to-142-pound range that stretched nearly seven feet long.

The Lake Winnebago system is home to one of the world’s largest self-sustaining populations of lake sturgeon. The latest models estimate that there are about 19,000 adult females (age 20-25 and older) and 24,000 adult males (age 15-plus) in the system.

If you’re a fan of salmon and trout fishing, consider supporting the efforts of the Algoma-Kewaunee Area Great Lakes Sport Fishermen by attending the 33rd annual banquet March 14 at The Rendezvous near Luxemburg. It will feature a prime rib and chicken dinner, door prizes, silent auction and raffles.

Check out the entries in the 2020 Great Backyard Bird Count photo contest, and dig into bird data by county, state or country at gbbc.birdcount.org.

As of Feb. 14, Lake Michigan was 17 inches higher than last year and six inches above the previous record, set in 1986. Water levels have risen more than five feet since 2013.