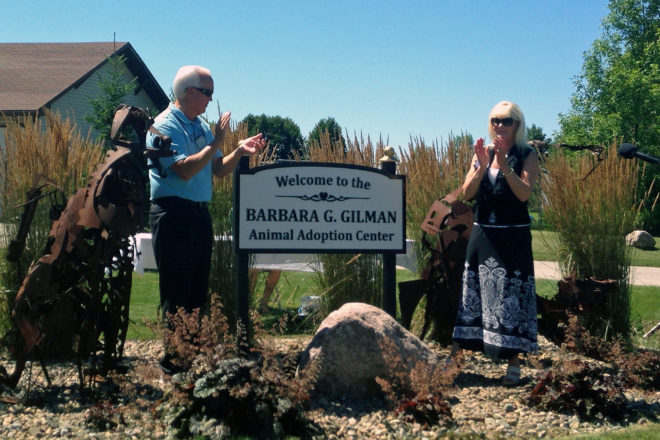 At the Aug. 12 ceremony dedicating the Door County Humane Society shelter building as the Barbara G. Gilman Animal Adoption Center, Gilman said this would be one of the most memorable moments of her life, and then added to much laughter, “Truly the fact that it’s not being awarded posthumously makes it even better.”

And she proved that she puts her money where her mouth is after announcing a $100,000 match grant challenge from Carol and Don Kress to help pay off the $240,000 remaining of the building’s mortgage, and kicking in the first $10,000 in that match.

“Right now our priority is to get our mortgage paid off,” Gilman said as she invited others at the dedication ceremony to follow her lead and donate to the cause.

Marilyn Jensen, former president of shelter’s board of directors, referred to Gilman as “the angel that Door County Human Society so desperately needed” and that the timing of her involvement 10 years ago was “divine intervention.”

In addition to generous donations and volunteering her time, Gilman also served on the board and beat the bushes for other donors to help build the new shelter on County PD, across from Cherryland Airport.

“Her art of soliciting others for funds is an art form,” Jensen said, adding that Gilman led the charge in fundraising events for the shelter.

“I do believe the shelter would not be here today if it was not for Barbara Gilman,” Jensen said. “She has put her paw print on this organization that will last a lifetime, and so many homeless animals now have a forever home because of Barbara Gilman.”

“People run sometimes when they see me coming because they know what I’m after,” Gilman said, adding, “It’s a never-ending financial battle to keep a place like this running.”

She thanked all those who have helped the humane society in the past, and she also thanked the staff and volunteers who put in all the effort to keep the no-kill shelter going.

“The easiest part of supporting a shelter is writing a check,” she said. “The hard part is the day-to-day stuff they do to keep these animals healthy and find forever homes.”