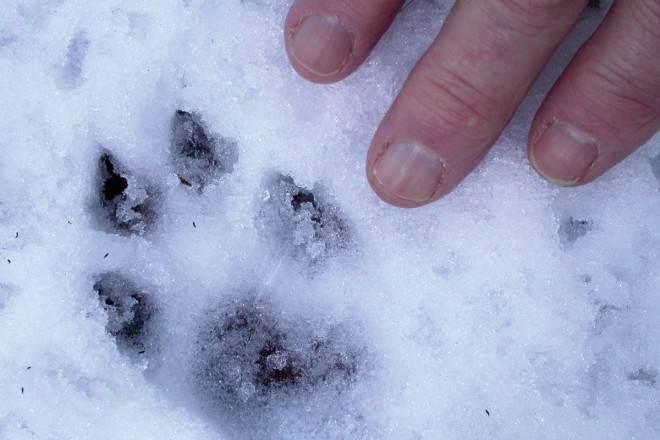 Some wild animal tracks in the snow are often the only evidence of these creatures many people get to observe. The common daytime feeders, such as the Wild Turkey, the Red and the Gray Squirrels, along with songbirds, are quite easy to study, even to the point of seeing the particular animal leaving their tracks behind them. The interesting thing about wild animal tracks in the snow is that they can tell more than simply the creature that made them.

Other “snow walkers” are those which by habit are extremely shy, species most commonly active at twilight or during the night when the great majority of people are shielded from darkness by the lighted warmth of their homes. Included in this group of animals are the White-footed Mouse, Meadow Vole, Cottontail, Red Fox, Gray Fox, White-tailed Deer, Long-tailed Weasel and Fisher.

Not to be overlooked as common track-makers in the snow are the house cat and dog. House cats tend to keep their feet warm indoors, although feral cats living in the wild often make use of plowed roads and driveways for much of their travel in the snow. Invariably, these tracks will be observed on the snow-covered ground below our bird feeders where they are hunting for mice or voles.

Dogs most often are accompanying people outdoors and covering several times the total distance of their owners. Dog tracks, unlike their wild canine relatives, the Gray Wolf, Coyote and Red and Gray Foxes, are not in a straight line, and instead go helter skelter, in and around, back and forth, though with a definite destination ahead of them such as a possible source of food. A walking or gently loping wild canid’s tracks are usually in a straight line, appearing quite dainty and downright beautiful, their makers seldom wasting any more energy than they have to.

Now that there have been positive identifications of Gray Wolves existing in Door County in very small numbers, people tend to “cry wolf” at their first sighting of a large mature Coyote. Yes, a Coyote may stand nearly as high as does a wolf, but one look at its paw tracks in mud or snow and there the resemblance ends. A Coyote’s front paw tracks average around two and a half inches compared to the wolf’s at roughly four and a quarter inches or even larger. A really large dog’s tracks can be close to the size of a wolf’s, but keep in mind the typical meandering nature of most dogs. Contact Michele Hefty, manager of Newport State Park and our county’s wolf expert, if you have further questions about wolves.

The total span of wild canids’ four paw prints, the distance between paw-one and paw-four, can be helpful in identifying the track-maker, although one must be careful to not jump to conclusions, not really knowing how fast the animal was moving. I strongly recommend consulting a good field guide to animal tracks. My favorite, a true classic, which I’ve owned since 1954 and hasn’t changed since, is the Peterson series, A Field Guide to Animal Tracks, written and illustrated by Olaus J. Murie, one of the greatest American naturalist writers of all time. This fascinating guide is still in print. The other outstanding book is Field Guide to Tracking Animals in Snow, by Louise R. Forrest.

“Sign reading” of tracks in the snow is a wonderful winter pastime. I’ve had several experiences while snowshoeing and following a Cottontail or Snowshoe Hare’s track. As I was leaving heavy ponderous tracks behind me, I suddenly found the animal’s had come to an abrupt end. Off to both sides of the tracks were outspread primary wing feather marks in the snow indicating a raptor, possibly a Great-horned Owl, had silently swooped down upon the unsuspecting rabbit, captured it while killing it instantly, and flown off with it.

The Short-tailed Weasel (ermine in winter) and the Long-tailed Weasel both are active throughout the year. Their most common prey are mice and voles and, with deep snow, are known to do much of their hunting beneath the deep white cover. Obviously the weasel’s hearing capability is extremely keen; some of my winter outdoor nature class students have seen, by observing tracks, that a weasel suddenly went straight downward, through a foot or more of snow, after a small rodent. A weasel’s tracks generally appear as a series of two small footprints next to one another, perhaps one to two feet apart. Typically their rear footprints land in their front prints, or occasionally close to them, thereby forming four small, close-together prints.

Determining the direction of a Cottontail and squirrel’s travel can be somewhat challenging. Bear in mind that when these animals are running, their front feet land first, closely followed by their rear feet which land ahead of their front ones. The length of their surprisingly long bounds comes from their large, strong rear legs and feet. In other words, their bigger hind paw prints will be at the front, the direction in which these animals are heading.

The winter tracks of two wild birds, the Ruffed Grouse and Wild Turkey, are both quite easy to find.

What is so amazing about the grouse’s tracks, and the bird’s ability to practically walk on top of the snow, are the small bristles or pectinations which begin growing in fall along the sides of each of the toes, roughly doubling their surface area and, in a sense, serving the bird like snowshoes.

Wild Turkeys, which have been steadily increasing in Door County and have actually become messy nuisances at many people’s winter bird-feeding areas, leave enormous three-inch-long tracks. These over-sized gluttonous game birds became pests at our winter feeders a few years ago, too, and upon measuring their stride while they were racing at full speed down our driveway, we found it to be around three feet. Their outstretched necks as they ran reminded us of the small dinosaurs running among the rolling hills in the movie Jurassic Park.

I have often reminded people to help “keep Door County wild,” which in turn will guarantee a good continuing supply of wild animals whose winter tracks in the snow are free for the asking and fascinating to study and enjoy.