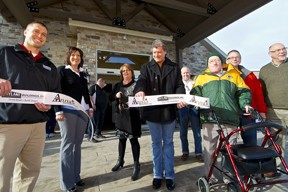 Just seven months after breaking ground, the doors have officially opened at Anna’s Healthcare in Sturgeon Bay. The new assisted living facility, which can house up to 70 residents, hosted a ribbon-cutting ceremony and public lunch on Dec. 12.

According to Anna’s Healthcare President Tammy Begley, the facility is currently home to 11 residents, with about 20 more waiting to be assessed. Begley said the staff is adding only a couple new residents each week to make sure everyone receives a thorough screening.

“We might be full-up by the end of the summer, but it’s hard to predict,” said Begley.

A number of community representatives and officials turned out for the ceremony. Sturgeon Bay City Administrator Steve McNeil said the new facility is a wonderful addition to the county’s other assisted living facilities, like Pine Crest Village, Cardinal Ridge, and Scandia Village.

“Scand serves a need up there, but it appears there’s a need for more beds in Door County,” said McNeil. “So this is great.”

A small part of the $5,000,000 facility was paid for by loans Anna’s received from the revolving loan funds for Door County and Sturgeon Bay, which are administered by the Door County Economic Development Committee. DCEDC Executive Director Bill Chaudoir said he expects the county will receive a sizeable return on its investment.

“It was a no-brainer considering they’re going to create up to 40 full-time jobs,” said Chaudoir. “It’s part of building that Door County retirement community.”

The facility has single-room and two-room units, as well as apartment units that come equipped with a refrigerator and oven. It also has a number of common areas, an exercise room, and a salon, among other things.

The cost for living at Anna’s ranges anywhere from $3,200 to $5,000 a month depending on how much care a resident needs. After taking a tour of the building, Sturgeon Bay and potential future Anna’s resident Gail Petersen said that while she would’ve wanted the building to have more two-room units and more storage space in each room, she was impressed overall.

When Petersen and the three other women in her group asked Begley about the two-room units, she said they filled up fast, and she’s already received a number of inquiries about them.

“I wish we would’ve put more in,” said Begley. “But we’ll be working on that situation.”

Begley is forming an advisory committee that will look at keeping the facility’s programs and services innovative and discuss how to use the 15 acres at the property that have yet to be built on.

“I really do want to go further with updating different services,” said Begley. “It doesn’t have to be the same old, same old.”

Those who have an interest in the advisory committee or getting more info on Anna’s can contact Anna’s Healthcare at 920.783.6331 or attend the facility’s open house, which will take place on Jan. 11, 12, and 13.