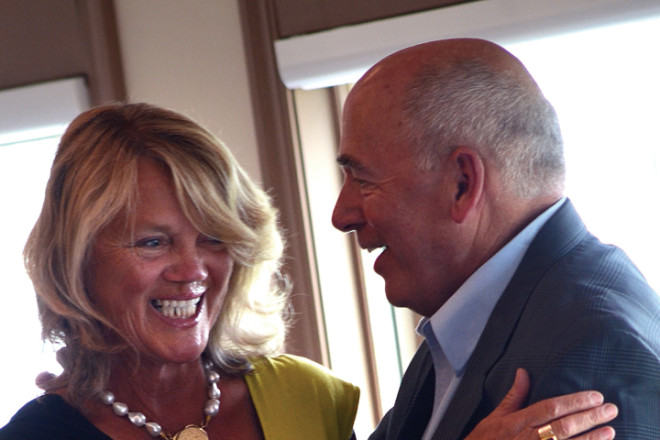 Anne Haberland Emerson said she doesn’t wake up each day thinking about how she can help people.

“I’ve only done things I thought were exciting and fun,” said the woman who left her job at the University of Chicago Press in 1969 to help her mother open a gallery in Fish Creek…and never left. But in doing the things she found “fun,” this woman with an ever-present smile played a pivotal role in bringing some of Door County’s most enduring philanthropic efforts of the last 30 years to fruition.

First there was Friends of Gibraltar, known to most as FOG, which she helped launch in 1982 to bring enrichment programs to Gibraltar School and the community. Over the years that program has brought a bevy of distinguished authors, dancers, artists, and performers to Fish Creek to work with the school’s students.

Then there was the Door Community Auditorium, over which there was a divisive battle in the community that frayed many relationships. Emerson, along with Peter Trenchard and George Larsen, was a passionate force in making it a reality.

“She had such belief,” recalled former Gibraltar Superintendent Bob Dahlstrom in a 2010 interview. “It wasn’t easy at the time.”

The auditorium helped legitimize the arts community as a force in local cultural and economic circles. In the 22 years since it opened with private donations it has hosted the likes of Johnny Cash, Willie Nelson, Ray Charles, Jeff Tweedy, Victor Borge, Tracey Chapman, and a list too long to recount.

At 68, her two children now raising children of their own mere steps from where they were raised on Peninsula Players Road, Emerson isn’t slowing down. She is spearheading the Write On, Door County! project, bringing her full circle to her first passion – writing.

“It’s what I always wanted to do,” she said, standing in her home writing room during a phone interview. “I don’t regret the move to Door County – now I have something to write about!”

Write On, Door County! was inspired in part by Pastor Michael Brecke, who talked to Emerson about creating a visual arts program for Door County children. Emerson thought the visual arts were covered, but that writing was neglected. She talked to FOG coordinator Vinni Chomeau about an idea, modeled loosely on Dave Eggers’ groundbreaking 826 Valencia, a mentorship program for young writers. Subtly, Emerson had the ball rolling again.

“We want to match mentors with kids interested in writing, but also create workshops and residencies for adults,” Emerson said. “Eventually we’d like to publish works through it. I don’t know where the money will come from, but I think it will.”

That last line is classic Emerson, who believes in the goodness of people as much as anyone you’re likely to meet. The auditorium controversy was difficult, but she came out of it with an even greater belief in the goodness inside people.

“Things can appear to be a struggle, but now being older and having seen life more, rather than concentrate on the struggle, you concentrate on the positivity that slowly gathers people together,” she says. “If the idea’s worth it, people will come around. I don’t take seriously obstructionists anymore, I just work really hard to make sure it’s so good that they say, ‘I’m really glad it’s here. I’m really glad my kid can be up on that stage.’”

She stays involved with the auditorium, she says, to make sure the promises they made to the community nearly 30 years ago are kept.

Emerson wrestled with the idea of being honored as the Door County Community Foundation’s Philanthropist of the Year in July of 2012. She wasn’t wealthy and her largest monetary contributions to causes came through fundraising, including two cookbooks that have raised more than $150,000 for charity.

But then she looked up the meaning of philanthropist.

“It doesn’t mean money, it means someone who cares about other people,” she says, pausing. “How could you not appreciate that?”

At the ceremony, DCCF Director Bret Bicoy praised her example.

“The greatest honor we can bestow upon Anne is not to celebrate her like we did today,” said Bicoy. “But rather, to emulate her like we can do tomorrow.”