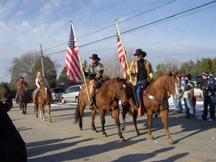 While thousands of Wisconsin families gather at the dining room table for a home-cooked meal or around the big screen TV to watch the Packers take on the Lions, one local boy and his family will spend it in the ICU. However, his struggle will not go unnoticed at Jacksonport’s Annual Thanksgiving Day Parade and Fund Raiser, now entering its 13th year. The parade kicks off at noon from the Jacksonport Fire Department.

Since 1997, the Jacksonport Thanksgiving Parade has delighted spectators with its quirky local flavor as well as collecting money for a family in need. Parade organizers didn’t have to look too far this year to find a member of our community who could use a helping hand. Rafael Phillips, the three year old son of Amy and Dave Phillips, remains hospitalized suffering from complications due to viral meningitis and encephalitis. Rafael has been in a Green Bay hospital since early September, and his family is struggling with the new challenges.

The Jacksonport Thanksgiving Parade, a fun-loving tradition started by Jeri Taylor and Verlin Kiehnau, grounds itself in the notion of neighbors helping neighbors, while getting together to have a good time. 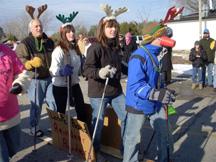 “The first year that we held the parade, we threw bird seed because we didn’t think anyone would come,” said Taylor, “but every year it gets bigger, in participation, spectators and ‘heart.’”

Parade viewers can expect the same blend of eclectic floats and characters mixed with a traditional Jacksonport fire truck, color guard, maybe a camel and of course Santa.

The Phillips family was chosen as this year’s recipient of Jacksonport Parade’s fund raising proceeds because their story exemplifies the spirit in which this parade was founded.

The parade starts at the Jacksonport Fire Station, takes a right on Highway 57 to Mike’s Port Pub where it turns around and heads down to the Square Rigger and then finally ends up at J.J.’s of Jacksonport. J.J.’s will be open during and after the parade. One of the best things about the parade is that as a spectator you can see it up to three times in its four block journey.

Anyone wishing to participate in the parade should be at the Jacksonport Fire Station by 11:30 am on Nov. 26. For more information please contact Jeri Taylor 920.823.2075.