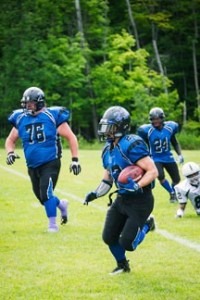 The Door Country Destroyers continued their dominance of the Wisconsin State Football League on Sept. 6 when they defeated the Jackson County Wildcats 44 – 0. It was the team’s third shutout of the season.

Quarterback Alex Whitney continued his dominance as he went 11-18 for 179 yards and four touchdowns. In his first action of the season, running back Buddah Martin rushed eight times for 51 yards and one touchdown. Wide receiver Arron Solie caught two passes for 56 yards and two touchdowns.

The Destroyers’ defense was led by linebacker Chris LeCloux’s seven tackles. Defensive end Bryan Beachler couldn’t be blocked as he tallied six tackles – five for loss – three sacks and a forced fumble. Cornerback Trevor Thompson picked off his third pass of the season to go along with three tackles.

The Destroyers are now 5-0 on the season while the Wildcats are 1-3.