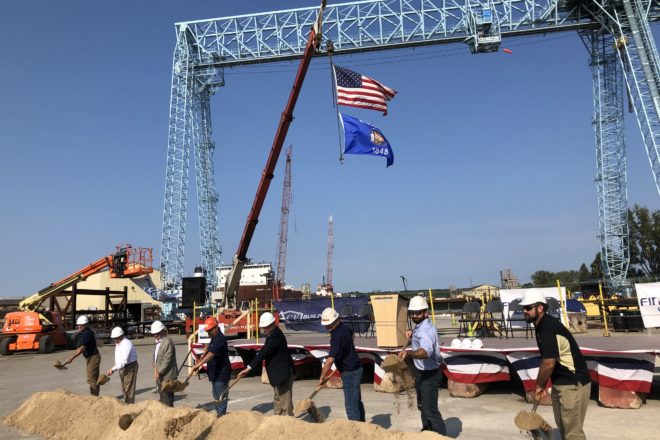 Some of the finest work completed by craftspeople at one of Door County’s largest businesses takes place inside the yard’s oldest manufacturing building.

That will no longer be the case 11 months from now, however, when Fincantieri Bay Shipbuilding (FBS) anticipates completing a new structure to replace the Sturgeon Bay shipyard’s outside machine shop and the inside machine shop that’s almost a century old.

Minutes after joining others to toss a few shovelfuls of sand during a Sept. 9 groundbreaking ceremony, lead inside machinist George Malvitz described the condition of the building where he and fellow crew members make parts.

The roofline of the 100-foot-long, 40-foot-wide structure sags near the middle and runs uphill slightly from the end of the building. Boards cover most of the windows that were designed to let in natural light from near the top of the building. The shipyard has satisfactorily updated wiring and other technology inside the shop to meet and surpass demands, “but otherwise, the building is in poor shape,” Malvitz said.

Crews have already completed some site work at the northeast corner of the yard to make way for a new, $5 million, climate-controlled facility in a 19,630-square-foot, pre-engineered Butler building, said Craig Perciavalle, FBS general manager.

“The layout will be much improved from the old shop, with upgraded cranes, including one 30-ton crane and one overhead, five-ton bridge crane, with a reinforced floor to help accommodate larger processes that are presently completed outside,” Perciavalle said.

The current machine shops have two cranes with a four-ton lifting capacity and two that can lift three tons.

“The south end of the building will include an office, lunchroom, restroom facilities and a tool-room complex,” Perciavalle continued. “All services in the building will be state-of-the-art, high-efficiency, green-rated systems that support the green initiative we have here at Fincantieri.”

Perciavalle said the relocated shop will have easy access to the yard’s massive, outdoor overhead crane on rails.

“This facility is strategically located in close proximity to our ‘Big Blue’ crane, as well as our large graving dock, which will enable us to increase our efficiencies during our busiest time – during what I call the ‘winter fleet phenomenon,’” Perciavalle said. “Ultimately and most importantly, this new machine shop will provide a safer and much-improved work environment for our employees, allowing our team to continue to safely provide industry-leading solutions to our customers.”

The new location for the shop, parallel to 3rd Avenue (which becomes Bay Shore Drive north of town), will also unclutter the ground-level view from the street toward the graving docks and winter fleet. Additionally, it should cut down on noise and airborne dust along that section of 3rd Avenue, according to FBS.

Perciavalle expressed appreciation to city officials, members of the city’s aesthetics committee, local union representatives, the U.S. Coast Guard, Sturgeon Bay police and fire department leaders, and local and state elected officials for their support of FBS and its growth.

“This $5 million project caps off over $70 million invested in this facility alone since 2020,” Perciavalle said.

He recognized current employees who work at FBS and noted that Sturgeon Bay’s yard is unique in that it builds new commercial ships and barges, repairs Great Lakes vessels and has an increasing amount of work building sections of military ships that are completed at Fincantieri Marinette Marine.

Currently, two LNG (liquified natural gas) barges are being constructed at the site for 2023 delivery – one of those the largest LNG barge ever built in the United States.

“It’s amazing what this group has achieved over the years, and I can’t tell you how excited I am about our future,” Perciaville said. “With all this growth, it’s an honor for me to work for a company that continues to invest in the facility.”

A boat-watching hobbyist and ship-canal neighbor, Sturgeon Bay Mayor David Ward emphasized the importance of economic development and supporting major employers such as FBS that boost the tax base for the city, county and school district. After the groundbreaking, Ward said “upwards of a thousand people” often work at the shipyard during the peak winter season, and it’s important for the city to allow improvements to enable the shipyard to function efficiently and continue to grow.

In addition, Ward anticipated that the shipyard’s military contract work would eventually add 150 to 200 jobs.

“That south yard is going to become very busy,” the mayor said. “These investments ensure decades of shipbuilding and economic opportunity for citizens of Sturgeon Bay and Door County.”

Ward said the city is doing its part to create more housing to meet workforce demands.

“We’re working hard in the city to ensure that new employees can start their career in Sturgeon Bay because the next challenge is [that] we’re going to have to recruit a new generation of shipbuilders here,” he said.

Earlier this summer, Perciavalle noted that anyone interested in a job at FBS need not wait until seeing a hiring announcement before applying.

“We are continually looking for talent in shipbuilding, from entry-level positions to skilled trades and engineering,” Perciavalle said. “With the work we have and the work coming, there’s no better time than now to join our proud team.”