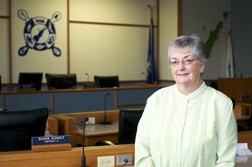 Susan Kohout was elected to represent District 6 on the Door County Board of Supervisors. Photo by Len Villano.

After a long stint observing county government, Susan Kohout recently became one of five new additions to the Door County Board of Supervisors. I sat down with the mother of two and retired special education teacher to discuss what she plans to do now that she’s been elected.

Matt Ledger (ML): At the next county board meeting, if you could put any one issue on the agenda what would it be?

Susan Kohout (SK): What’s logically the next thing is they need to hire a County Administrator. I realize they’re not going to be in a position to do that next time, but that process needs to be ongoing, moving as effectively and efficiently as it can.

ML: At the last meeting, the County Board voted to retain the County Administrator position, rather than revert to an Administrative Coordinator. Do you think that was the right choice?

SK: Absolutely. An Administrative Coordinator does not have the same authority over department heads. It works with them to facilitate, but he or she is not a boss. And in a county with the size budget that we have and the complexity of services, you have to have somebody who can run the show.

ML: In the candidate write-ups the Pulse did before the election, one of the issues you said was important to you was the transition from separate Community Programs and Social Services departments into one, new Human Services department. Why is the county combining those departments?

SK: Most counties in the state have Human Services departments rather than the two separate departments. The state actually has one contract with the county for a human services budget. We choose to split that revenue stream and to use that contract for both of our departments.

It seems like putting them together makes sense. There are some things that both departments do now that would be eliminated if they were one department, and there’s potential for giving better service to clients. When you have two separate departments there are rules about sharing information, and yet sometimes you might be planning for the same family. If it’s all one department then you have a better chance to plan together for that group of individuals.

ML: The other issue you said was important to you was the creation of an Aging and Disabilities Resource Center (ADRC). Why is that important, and why has the state mandated that each county needs one?

SK: Door County is relatively late in the implementation of [creating an ADRC]. We’re one of the last of a handful of counties to implement that.

I believe the idea is that right now you have different units that serve different population of needs, whereas if you have an ADRC it’s kind of like the open door. It’s for anybody who has service needs, or who has disabilities, or who might be aging. That’s where they come, and then somebody there helps screen them and point them in the right direction.

It’s a way to get in the door and find out what’s available to help, whether it’s a parent or a child or whatever the issue might be. You’ll have one place to go to get started finding it.

It’s especially important here. I believe it was Ben Meyer at the last meeting who said that the projections say that the amount of people who will be 65-plus in Door County by 2035 is 44 percent. That is a huge aging population.

ML: Where exactly will the county house the ADRC?

SK: I have no idea. I did sit at the ad hoc committee that studied this issue, and they identified that there were space needs. But where exactly those are, we don’t know. The Property Committee will look at the space needs for the ADRC and Public Health, which doesn’t have the space it needs, and any other adjustments.

The other issue that I remember coming up is that the personnel at the ADRC, because of the population they’re going to serve, it’s a better match for them to be housed with the people that work at the Senior Center. Having them in two separate places makes it awkward for both groups of people to do their jobs and for clients who might need to see both sets of people.

So the hope is that down the line, once this space issue is sorted out, the ADRC people who start this process will eventually be housed with the Senior Resource Center people in a site where seniors can come for services on a regular basis.

ML: Is there anything else that you’d like the voting public to know?

SK: Well, I’m going to sound like a politician, but I’d just like to say that I’m grateful that I have this chance. Obviously, I wouldn’t have run for office unless I wanted to do this. I’m excited about it, and it’s a privilege. Once it had sunk in that I’d actually won, there was this humbling and awe-inspiring feeling that there’s this responsibility that I have. I believe in government and the democratic process, and I’m grateful to have a part in that.

(Some answers truncated due to length.)