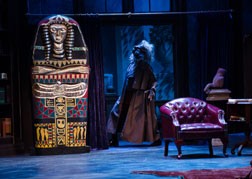 Sean Grennan as a werewolf stalking the moors in Charles Ludlam’s “The Mystery of Irma Vep – A Penny Dreadful.”

A penny dreadful was a 19th century type of British fiction publication. It generally featured sensational stories published as installments or serial form over a course of several weeks with each installment costing a penny. The term soon came to encompass a variety of publications that featured an exaggerated, melodramatic story line.

Ludlam borrows from this form as well as Victorian melodrama, Universal monster movies, German expressionist film, mystery and other classic sources such as Rebecca.

The Mystery of Irma Vep begins at the manor estate “Mandacrest,” the home of Lord Hillcrest, an Egyptologist, and Lady Enid, a former actress. Also residing on the estate are their mysterious servants, Nichodemus Underwood and Jane Twisden. While a killer wolf roams the moors, Lady Enid is haunted by the vengeful spirit of Lord Edgar’s first wife, Irma.

Actors Grennan and Fortunato are cast in multiple roles in this high-octane comedy which requires more than 40 costume changes. Grennan plays Lord Edgar Hillcrest, the master of the manor, and the housekeeper, Jane, while Fortunato plays Lady Enid, the new mistress at Mandacrest, the groundskeeper, Nicodemus, and an Egyptian tomb guide.

Performances begin at 8 pm Tuesday through Saturday and at 4 pm on Aug. 17. For more information or to reserve tickets call 920.868.3287 or visit peninsulaplayers.com.